Win by a comprehensive 10-wickets in 17th over 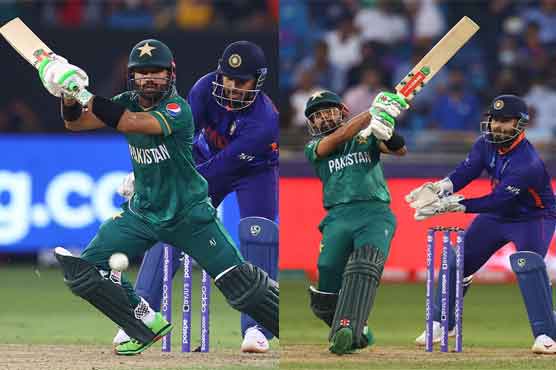 Both the Pakistani stars achieved the milestone during the World Cup in high voltage clash against India. They made a record of Pakistan’s best-ever partnership without losing any wicket against the arch-rivals.

Babar and Rizwan break the 9-year-old record made by Mohammad Hafeez and Shoaib Malik when they scored 106 runs for the 4th wicket in 2012 at Bangalore.

Both the players also posted the highest ever partnership for any wicket by any team against India in T20Is surpassing 133 by David Warner and Shane Watson.

Pakistan dismissed Indian skipper Virat Kohli as Pakistani pacer Shaheen Afridi delivered the perfect slow bouncer to send Kohli back to the pavilion for the first time in T20 matches.

Afridi claimed three wickets for Pakistan in the thrilling contest against arch-rival India.

Giving comment on his performance, Afridi said that it taking early wickets was always the plan.

Pakistan wicketkeeper Mohammad Rizwan took a superb catch propelling his name to one of the top Twitter trends as he achieved the milestone of 100 T20 catches.

Rizwan took a phenomenal catch off a Hassan Ali delivery to dismiss Suryakumar Yadav in the sixth over of the T20 World Cup match against India. Leaping to his right, Rizwan caught the ball, putting India under further pressure and achieving yet another milestone for Pakistan.

Twitterati instantly lauded the remarkable catch. Here are some of the tweets praising Rizwan:

It is pertinent to mention here that this is the only match of the World Cup for which 100 per cent tickets were sold on the first day in a very short time.

Even if the quality of Mariati s arguments is tested, the national Shaheen can fly high and they have the full potential to crush the Indian warriors.

India is second in the ICC rankings while Pakistan is third with a difference of only 5 rating points. Pakistan has played a significant role in the history of T20 World Cup.

Both the teams have won the World Cup once, while traditional rivals have the honor of being runners-up only once. The Shaheen have the experience to play in the semi-finals.

Babar Azam is also second in the individual rankings. The psychological advantage of the national skipper is that he snatched the top position from Virat Kohli who is now at number four.

In a tweet on social media platform Twitter, the president said, “Congratulations Green Shirts. Total Wipeout. A win by 10 wickets. You make us proud. A good match. Tremendous batting by Mohammad Rizwan and Babar Azam. What a pleasure to see total dominance. Going towards a good ending.”

In a tweet, the prime minister said, “Congratulations to the Pakistan Team & esp to Babar Azam who led from the front, as well as to the brilliant performances of Rizwan & Shaheen Afridi. The nation is proud of you all.”