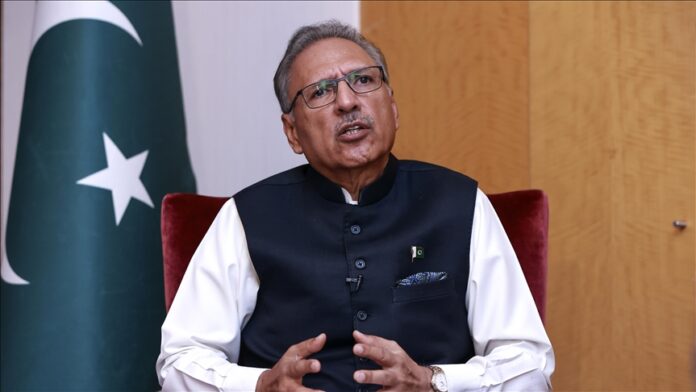 In a meeting held here at the Leaders Pavilion ar Dubai Expo 2020, the two leaders reaffirmed to strengthen the existing close fraternal relations between Pakistan and the UAE in diverse fields.

The two leaders reviewed prospects of growing bilateral relations on all fronts while discussing a number of regional and international issues of interest.

The President congratulated the Vice Minister and Prime Minister of the UAE on the successful inauguration of Dubai Expo 2020.

He lauded the tremendous efforts of the UAE government and Expo Management Team for organizing the world’s most diverse and widely participated exposition, which will remain open for six months.

The president underlined that the Expo 2020 was a landmark event not just for the UAE but also for the whole region.

He added that Dubai Expo 2020 would offer a unique opportunity to the countries of the region and beyond to establish linkages and partnerships with multinational companies.

The President also briefed the UAE prime minister on the theme of Pakistan Pavilion, which mainly focuses on showcasing the unexplored and undiscovered treasures of Pakistan.

Felicitating Sheikh Mohammed bin Rashid on the ongoing golden jubilee celebrations of the United Arab Emirates, the President acknowledged the role of the UAE’s visionary leadership that helped transform the UAE into a hub for regional trade, transport, logistics, technology, and tourism.

The President and Sheikh Maktoum exchanged views on issues of bilateral and regional interest, including the situation in Afghanistan.

The President also apprised the UAE Prime Minister on the continued and blatant violations of fundamental human rights of the Kashmiri Muslims by the Occupying Indian Armed Forces in the Indian Illegally Occupied Jammu and Kashmir (IIOJK).

Recalling the historical fraternal relations between the two countries, the President reaffirmed  Pakistan’s desire to forge closer and deeper cooperation with the United Arab Emirates in all fields.

The President also expressed gratitude to the leadership and people of the UAE for hosting 1.6 million Pakistanis in the UAE. He underlined that Pakistani expatriates in the UAE continued to play an important role to strengthen the bilateral bond and contributed significantly to the development of the two countries.

The President is undertaking a two day bilateral visit to the UAE. After meeting the Prime Minister of the UAE, he formally inaugurated the Pakistan Pavilion at Dubai EXPO 2020.