Afghans flock to Iranian border, but few can cross

For those without their papers attempting to cross, the experience can be harrowing 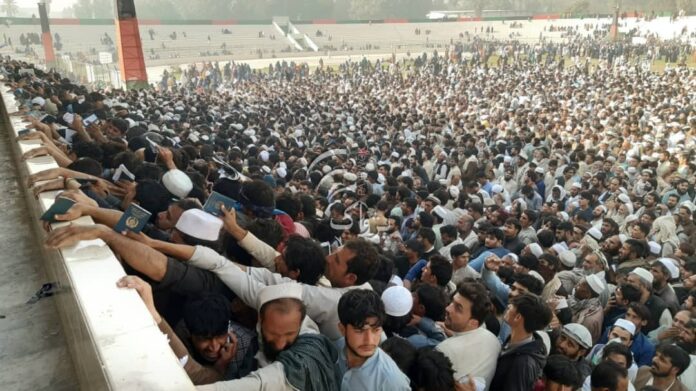 The number of Afghans attempting to cross the border to Iran has soared since the Taliban swept to power almost two months ago, but few make it across, an official said.

Before the Taliban came to power on August 15, around 1,000 to 2,000 people crossed to Iran through the Zaranj border station in the southwestern province of Nimroz every month.

But the border commander for Nimroz province, Mohammad Hashem Hanzaleh, told AFP this week that the number of people attempting to cross has since soared to between 3,000 and 4,000 every day.

The hike comes as devastating economic and humanitarian crises lash Afghanistan, with the UN warning that a third of the population faces the threat of famine.

But Hanzaleh said that very few had the papers required to cross.

Traders and people holding residence visas, as well as those with visas to seek medical treatment, “are not prevented by Iranian forces,” he said, adding that about 5-600 people were allowed across each day.

For those without their papers attempting to cross, the experience can be harrowing.

Hayatullah, wearing a towel-like turban and a grey beard, showed off his injured hand, with dark blood seeping through the bandage.

“Iranian soldiers took our money. They hit our hands, they tore our hands,” he said.

Mohammad Nasim said he had been thwarted three times after trying to scale over the border wall.

Two nights earlier, he said Iranian border guards had opened fire and killed two people trying to get across, including one of his friends.

That did not stop him from returning the next night, only to find himself “captured” and “beaten”, as the guards asked why he was trying to cross without documents.

He said he had answered: “If you saw the poverty, hunger and misery of our nation, then you would go to the other side of the border too.”

“We don’t have any other solution.”