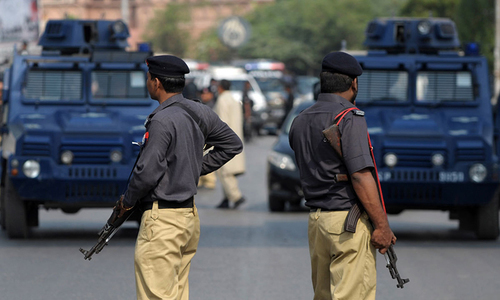 The excise department’s director general (DG) in Karachi on Monday accused police of misusing their powers and illegally taking away a “habitual criminal” from the custody of excise personnel.

Earlier on Saturday, the police had recovered the allegedly kidnapped man, identified as Ali Hussain, from the office of the excise DG in Karachi, saying that a ransom of Rs2 million was demanded for his release.

Pirabad SHO Wasim Ahmed had said that police had carried out a raid at the DG’s office and recovered Hussain, besides arresting one excise constable and two private persons. He had added that neither senior excise officers were aware that Hussain was kept in their office nor the excise department had informed the police about his arrest from their area of jurisdiction.

However, in a statement on Monday, the DG criticised the police officials, who had raided his office, for damaging the reputation of his department and announced to take legal action against them.

The DG said that the Pirabad SHO and other police personnel overstepped their authority, climbed over the walls of his office, took the watchman hostage at gunpoint and beat him.

He said that Hussain was arrested and booked in a case pertaining to the possession of 8.2 kilogrammes of drugs, adding that Hussain is a habitual drug dealer with previous criminal record.

“An illegal FIR was lodged against Excise Constable Jan Muhammad and two other persons who were assigned cleanliness work,” he said, adding that senior officers of the excise police are in touch with senior officials of Sindh Police so that legal action can be taken against this illegal act of SHO Wasim Ahmed.

Meanwhile, the police booked the arrested excise constable and two private persons on charges of kidnapping for ransom, dacoity and forcible entry into Hussain’s house in New Mianwali Colony of Orangi Town. They were arrested after an FIR was registered on behalf of Hussain’s son, Kashif Afridi.