Too often, one goes to court for revenge, not justice 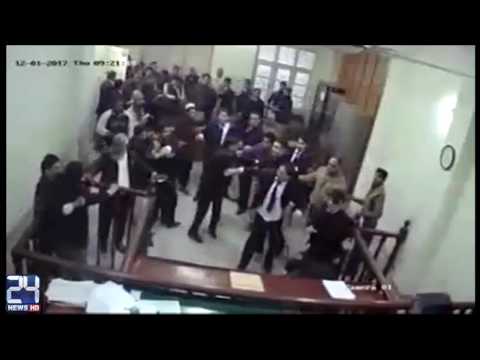 Courtrooms are not safe anymore in Pakistan. Legally speaking, a court is a place where trials are conducted and legal cases are decided in accordance with the law. Persons facing trials, or litigants claiming rights, come to court with a belief that it is the safest place where their rights will be protected, determined, and respected; they are under the protection of the law; they will get justice. However, with an increase in killings, shootings, fighting, and squabbling inside, outside, or even near the courtrooms, the trust of citizens upon which the premises of justice stands is starting to diminish. Therefore, it is high time to make sure that the courtrooms are the safest places to get justice.

In Pakistan, work in courts have been divided according to subject: civil, criminal, family, tax, banking, service matters, and so on. Likewise, in the higher judiciary, work is also distributed amongst benches. It is becoming common day by day to watch the situation of chaos inside, outside, or near the courtrooms. What to speak of district judiciary, even the higher judiciary is no exception to it.

Civil and criminal are two major divisions of the court work. In civil matters, quarrel amongst litigants often ends with police intervention, even though late, or after catching TV channel cameras, etc. but never ends with the death of anyone, because only future or financial interests are involved. However, in criminal matters, the situation is entirely different, because the loss of life is involved.

In criminal litigation, especially murder trials, litigants come to court not to get justice but to take revenge. It is not the hope of justice that is the leading factor, under the present circumstances of the criminal administration of justice in Pakistan, rather it is the rage and revenge that urges litigants involved in murder trials to come to court; many a time, only to get a chance to kill the accused or to injure him or his family members inside, outside, or near the courtrooms during trial hearings.

This is not rocket science, this is very simple, a child of today’s age can do it. So, to conclude in the words of Stephen Hawking that “we are all connected like neurons in a giant brain”, it is the utmost requirement of the time that safety of lives be ensured inside the courtrooms through the use of modern technology and use of modern devices which is available in the hands of more than 180 million citizens of Pakistan

In recent days, only in Punjab, it can be seen that the situation inside criminal trial courts is very grim. Moreover, as per news and circulated videos on social media, a man wearing the uniform of an advocate shot down his target during court proceedings in the presence of police. Everyone was unsafe: the judge, the prosecutor, the stenographer, the reader of the court, the police officials, the clerks, the lawyers.

This is not unpreventable, rather this can be avoided with the use of modern technology. Our criminal laws are old: 1898 Procedure, 1908 Penal Code. When electric light was rarely available. When mobile phones are unimaginable. When the Internet was beyond thought. When for summons we needed many days and a person for this job only. Whereas, as per research, in 1973, the first call from a hand-held device was made with a phone-shaped device of Motorola company. And January 1, 1983, is considered the official birthday of the Internet.

After that life has changed. Today the world is one click away. This is the age of light, speed, and the internet. Sadly, still today we are roaming around governed by archaic laws made by colonial masters not to favour the citizens of the Subcontinent, rather to rule over them. Resultantly, we are still losing the lives inside, outside, or near the courtrooms: for what, justice?

Anyhow, by using modern devices, not only can these killings surely be prevented but also the state expenses can be minimized in conducting court proceedings. The summoning and attendance of accused persons, either on bail or under custody, should be made possible through the use of modern devices that must be installed inside each criminal trial courtroom. Although the colonial masters’ designed laws fixed the recording of evidence in the presence of the accused; it does not debar the use of modern devices for achieving the ends of justice.

In a recent case Muhammad Israr versus the State, the honourable Peshawar High Court has provided detailed guidelines that must be followed by trial courts in recording evidence through the use of modern devices which can be taken as the first drop of rain. Likewise, the Supreme Court of Pakistan also time and again has highlighted the use of modern devices in recording the evidence.

Judges should not act as spectators, and courts should not act as post offices. It has often been seen that accused persons facing trial moved applications that their lives are under threat, and judges just pass stereotyped orders for the police officials: mostly to the Station House Officer of the police station to ensure safety, who in compliance increases the quantity of deputed officers. Amongst those officers, RE TOHSE mostly have remained on various raids, or who have been deputed on whole-night security, and are thus much too tired to actively obey the orders; so, they leave things in the hands of fate, and the accused to the tender mercies of his accusers.

What should be done is that whenever any witness or accused, or any complainant, or even anyone attending court proceedings, moved an application of a life threat, it should not be considered lightly, rather his attendance must forthwith be shifted and be ensured through the use of modern devices: one TV, Internet device, and one operator inside the courtroom; one TV, Internet device, and one operator inside the police station in case of persons other than accused or accused on bail, or inside the jail premises in case of accused facing trials. That police station or jail then simply will be connected through the Internet and court proceedings can be conducted safely.

This is not rocket science, this is very simple, a child of today’s age can do it. So, to conclude in the words of Stephen Hawking that “we are all connected like neurons in a giant brain”, it is the utmost requirement of the time that safety of lives be ensured inside the courtrooms through the use of modern technology and use of modern devices which is available in the hands of more than 180 million citizens of Pakistan.