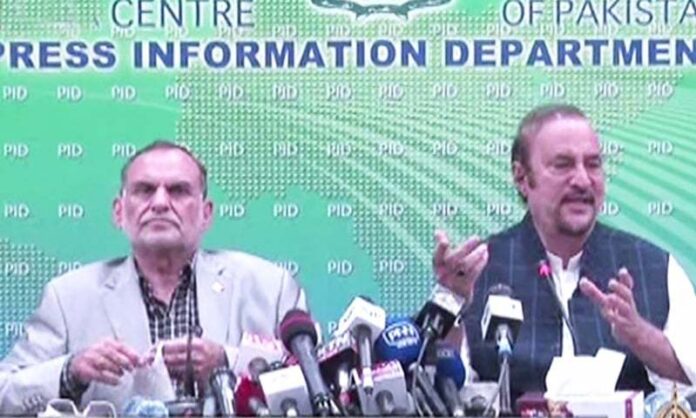 Minister for Railways Azam Khan Swati Monday said that the incumbent government had to swallow a “bitter pill” after the appointment of the chief election commissioner to preserve the sanctity of this “constitutional institution”, referring to the Election Commission of Pakistan.

Speaking at a press conference along Advisor to Prime Minister on Parliamentary Affairs Dr Babar Awan, Swati said Chief Election Commissioner Sikander Sultan Raja was speaking the opposition’s language to “mess around” with the government, which was standing its ground like an “iron wall”.

He did not elaborate on the details of Raja’s appointment but did imply it was under untoward circumstances. I don’t want to and won’t reveal how you [CEC] were appointed,” Swati said.

If we didn’t respect the ECP, we would have never appointed you,” he said, adding that the government confirmed his appointment to abide by the Constitution and protect the ECP’s dignity despite knowing that he was allegedly close with the Sharifs.

Swati said the government only wanted uncontroversial, fair and free elections and a system which “future generations can’t point fingers at”.

He questioned why the CEC had made no progress on pilot programmes as ordered previously by the Supreme Court or the parliament through the Elections Act 2017.

“I again remind you Sikandar Sultan Raja sahab that only the one who accepts defeat, loses. Come and see whether the law and the Constitution are greater or your own being.”

The railways minister continued to lash out at the CEC and asked him on “whose instructions are you destroying such a great institution”.

“I, this nation and overseas Pakistanis want to ask you this.”

Regarding the notice sent to him by the ECP for his tirade against the institution, Swati questioned how many such similar notices had been sent to other political leaders from the opposition.

Responding to a question on whether the government was ready to sit down with the ECP, Swati clarified: “We don’t have a quarrel with the ECP but with Raja Sultan.”

According to the railways minister, the entire purpose of the press conference was to send this message: “Raja sahab you cannot violate the law or the Constitution […] When the parliament passes its voice through a law then under the leadership of [Prime Minister] Imran Khan, we will [bring] a fantastic [electoral] system.

“You will buy the [electronic voting] machines and you will also do work. We will go to the Supreme Court if we need to.”

Speaking on the occasion, Advisor to Prime Minister on Parliamentary Affairs Dr Babar Awan said that government would ensure legislation for transparent elections in future and was also ready to talk with opposition on electoral reforms as well as electronic voting machines.

Awan said that a joint parliamentary committee had been proposed for negotiations on electoral reforms which would include the members from both sides of the aisle.

He added that a motion would be moved in the Senate and National Assembly requesting the Chairman and Speaker to nominate members of the respective Houses in this committee.

He said the government had contacted the opposition last week following the directions of Prime Minister Imran Khan and was ready to take confidence-building measures on electoral reforms.

The formation of the Joint Parliamentary Committee is part of these measures and electoral reforms will be ensured through it.

However, the advisor clarified that electoral reforms were the fate of the nation as the government wanted to give a transparent election system to the people.

Dr Babar Awan said that EVMs had been used in 72 countries while credibility on these machines increased from 35 percent to 89 percent during the last three elections in Philippine having the population of around 111 million people.

The advisor to prime minister said that PPP government talked about EVMs in 2009 while the ECP and the previous governments from 2014 to 2016 also deliberated on it. He maintained that a parliamentary delegation including PPP leader Syed Naveed Qamar, PML-N leader Murtaza Javed Abbassi and the then opposition member and incumbent President Dr Arif Alvi also conducted a foreign visit in the past to witness election conducted through EVMs.

Therefore, he said that it was morally incorrect to oppose the EVMs by the opposition members at this stage.

Dr Babar Awan quoted section 103 of the Elections Act, 2017 and said the former government itself agreed to consider the use of EVMs in past and directed ECP through legislation to proceed in that regard.

He said that government would now proceed with electoral reforms and the use of EVMs at every cost because more than four years had been wasted.

The Advisor also reiterated to fulfil the promise of the right to vote for overseas Pakistanis and said the government would ensure it through legislation because it has the majority in the Parliament.

Dr Babar Awan said that economy of the country like other sectors improved due to reforms during the tenure of Prime Minister Imran Khan. Similarly, he said that electoral reforms would be ensured and a transparent election system would be introduced in the country.

with additional input from INP