Pakistan getting momentum in animated films 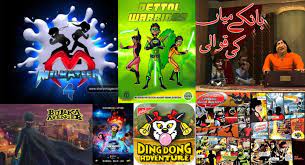 An iconic figure in Pakistan, Let Girls Dream was released in 2020 on NetFlix, directed and written by Oscar award-winning filmmaker Sharmeen Obaid Chinoy and produced by Gloria Steinem. The story revolves around the girl Pari, a 14-year old Pakistani, who dreams of becoming a pilot and wants to become like Amelia Earhart. She and her sister Mehr used to fly paper planes on the roof. She was unaware of the tension between her parents, and she was unaware that her father plans to marry her to a much older man. Film credit reels show that the father learned the lesson and sent her daughter Mehr to school, and she graduated and became a pilot.

The length is 15 minutes, and it is silent but with a heavy message. The film shows the issues of child marriage, a girl’s dream, and the ray of hope. The film has won three awards at the 2019 Los Angeles Animation film festival. The film received a 7.3 rating out of 10 on IMDB.

You may have heard about 27 February 2019, when the Pakistan Air Force conducted a total of six airstrikes at multiple locations in Indian Occupied Kashmir. Pakistan shot down two Indian jets, a MiG21 and an Su30, and captured Indian pilot Abhinandan Varthaman. Pakistani filmmaker DJ Kamal Mustafa has produced, written, animated, and directed a short animated film based on this event. If you’re into dogfights, aerial fights and would love to watch military films, then you would like this movie for sure. The film is official for the Pakistan Air Force, a non-profit animated film of 23 minutes, and is available to watch on the digital platform. It was he sole animated film of Pakistan in 2019.

Pakistan is also making a name for itself in the film industry without having support from higher officials. The government of Pakistan should support the filmmaker, and a time will surely come when Pakistan will be at the forefront in this field. There is no shortage of talent in Pakistan. Not getting opportunities despite having expertise is a frustrating process

To complete this film, lots of high-end engines and software were brought into actionThe realistic scene of an aerial combat fight will keep the audience entertained. It shows Pakistan’s air force headquarter with the systems, satellites, and the operation command and control center with the military equipment and jets. The films received a 7.9 rating out of 10 on IMDB.

Allahyar and the Legend of Markhord

This film is about a young boy who loves animals, and his relationship with those animals. This 2018 Pakistani animated film written and directed by Uzair Zaheer Khan and produced by Usman Iqbal. It will take you to the northern regions of Pakistan. The film is about animal rights, and the film shows the aspect of illegal hunting of wildlife. The main character of the film is Allahyar, a young boy who lives with his father. Allahyar’s father is a forest guard, and that’s how Allahyar became attached to animals from childhood. One night he goes out in a forest and hears some noise and finds Mehru (an animal known as) Markhor. The life of both Allahyar and Markhor were in danger as the hunter who tried to kill Allahyar’s father was coming for him. The film is engaging and manages to hold your attention for all of 90 minutes. Ali Noor, Anum Zaidi, Azfar Jafri, Ali Rehman, and others did a good job and won’t make you bored.

Was Allahyar able to save the Markhor? If you want to know, then you must watch this beautiful film. The film won the prestigious Monolith Award for Content at the Infinity Film Festival in Hollywood. Allahyar screened At the South Asian International Film Festival in Newyork. The film received a 7.7 rating out of 10 on IMDB.

An animated film directed by Sharmeen Obaid Chinoy, an Oscar-winning filmmaker who never disappoints her audience, it was the first-ever animated film of Pakistan released in 2015. The story of the film is about a fictional village, “Roshan Basti” in Pakistan. In Roshan Basti, three children named Aman, Saadi, and Kamil are working hard to save the people of the village from the evils that have spread like an epidemic. The three children, who fight against the devil in the film, have superpowers . The three heroes come together through friendship, and their teamwork defeats a dangerous enemy. The story is interesting and connected to the real world, and presented in such a beautiful way that the characters, atmosphere, and places look real and unique. The atmospherics are good enough to make this film perfect.

This film has two more sequels, 3 Bahadur: The Revenge of Baba Balaam and 3 Bahadur: Rise of the Warriors. The film received a 7.4 rating out of 10 on IMDB.

In the era of cybercrimes, when a female uses social media, she has to face lots of trouble, from harassment to unwanted inbox messages and cyberbullying. Some women fall victim to cybercriminals, and then there comes a time when they don’t even daPakistan is also making a name for itself in the film industry without having support from higher officials. The government of Pakistan should support the filmmaker, and a time will surely come when Pakistan will be at the forefront in this field. There is no shortage of talent in Pakistan. Not getting opportunities despite having expertise is a frustrating processre to confront anyone. An animated film was released to defeat cyber criminals and give women a safe place on social media. The Federal Investigation Agency of Pakistan (NR3C), in association with DJ Kamal Mustafa made the latest animated film of Pakistan, which was released in 2021 by filmmaker DJ Kamal Mustafa

Animated, directed, produced, and written by DJ Kamal Mustafa, it is a film especially for the females who faces harassment on social media. The film shows how people can protect themselves from ATM Skimming devices. The film has a separate scene for females on how they can protect themselves from being victims of harassment, cyberbullying, and blackmailing. The 12-minute long film has received a rating of 10 out of 10 on IMDB.

There are a lot more animated films to be released this year in Pakistan.

Pakistan is also making a name for itself in the film industry without having support from higher officials. The government of Pakistan should support the filmmaker, and a time will surely come when Pakistan will be at the forefront in this field. There is no shortage of talent in Pakistan. Not getting opportunities despite having expertise is a frustrating process.

DJ Kamal Mustafa
The writer is a freelance columnist