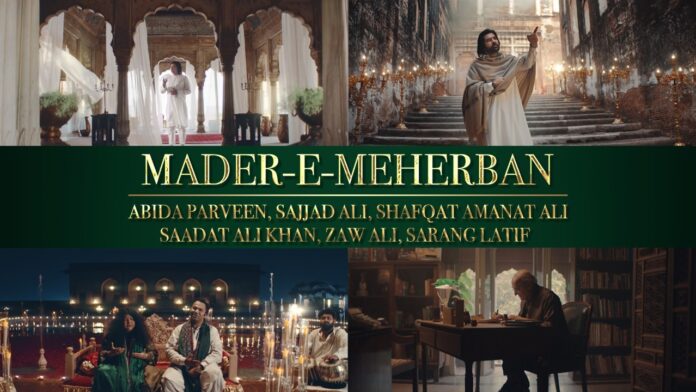 ISLAMABAD: After a long time, a thought provoking song has been conceived and composed with the collaboration of eminent songwriters, composers, producers and singers dedicated to the spirit of patriotism.

With Amjad Islam Amjad penning lyrics to Sahir Ali Bagga at his best in composing the music, a truly unique track has been conceived. Three music legends, recognised as pioneers of the industry both domestically and internationally, were part of the force that made Mader-e-Meherban possible.

Sindh’s gift to Pakistani music Abida Parveen, with her incomparable command on the Sufi genre, gels in perfectly with the song. Sajjad Ali, a pop music icon of the country, lends his vocals to add to the diversity of the track. Shafqat Amant Ali misses no opportunity to brilliantly incorporate his classical training into other genres to create a sound that becomes his own. All three artists are the driving force behind Mader-e-Meherban.

The central idea behind the song is how to pass on the spirit of patriotism from one generation to the next. Not only the values and traditions, but also deep respect and love for the country–Pakistan. As this love is passed on from a father or mother to their son or daughter, it showcases that the next generation wears this badge of loyalty on their chest with pride. For this purpose, the song also features Abida Parveen’s son Sarang Latif, Sajjad Ali’s daughter Zaw Ali and Shafqat Amanat Ali’s son Saadat Ali, all of whom are established artists in their own right and are beautiful additions to the song.

Yasir Jaswal’s video does complete justice to the song, which is remarkably shot to put across its true message. The music video consists of two generations of musicians not only passing on their craft to the next generation, but also what they hold closest to their heart–Pakistan.

Karachi Administrator Murtaza Wahab on Monday said that the Sindh government has allocated Rs2 billion for the renovation and improvement of Karachi Zoo Zoo and...
Read more
CITY

The Punjab Primary and Secondary Health Department on Tuesday revealed that dengue cases were massively increased in Lahore during the month of September. The total...
Read more
CITY

The New Zealand head coach has said that the team didn’t decide to pull out of the tour. It seems the next step is...
Read more
- Advertisment -