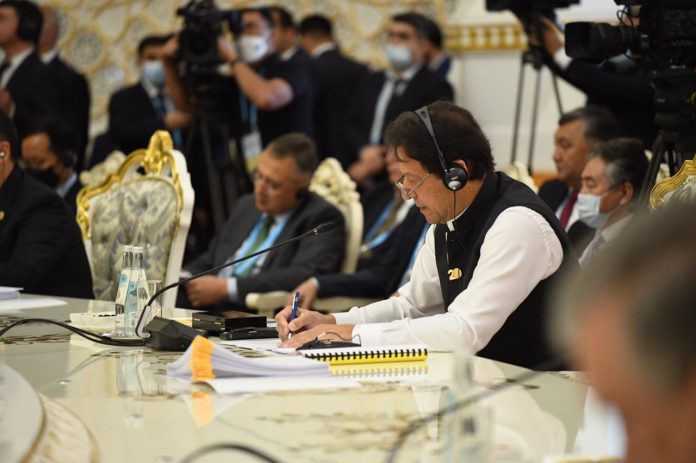 DUSHANBE: Prime Minister Imran Khan on Friday has asked SCO nations to work collectively for resolution of the Aghan issue.

Addressing the SCO Head of States Summit, PM Imran Khan said that the region is facing numerous challenges and we have to work collectively to resolve the issues including the Afghan problem.

It is time for the world to stand with Afghanistan, as we know that the past Kabul government was running on 75 percent international aid.

The world should accept ground realities about Afghanistan, he maintained.

On Pakistan’s stance about the new Afghan government, the premier said, Islamabad respects the sovereignty of Afghanistan and we think that any decision regarding Afghanistan should be taken by the people of the country.

Afghanistan is a country, which cannot be ruled from outside neither it can be left all alone.

He pointed out that a “new reality” has been established in Afghanistan after the Taliban takeover and the world should accept that.

“The Taliban must fulfill the pledges made, above all for an inclusive political structure where all ethnic groups are represented. This is vital for Afghanistan’s stability,” he said.

“It is relieving that all of this happened without bloodshed, civil war, and a mass exodus of refugees.”

It is now the international community’s responsibility to prevent any new conflict in the war-torn country and ensure that its security situation is stabilised, the PM said.

He called preventing a humanitarian crisis and economic meltdown “urgent priorities” for Afghanistan. “We must remember the country was primarily dependent on foreign aid and there’s a need for humanitarian assistance.”

He stressed that the Afghan Taliban should fulfill their promises and assured Pakistan’s support for a peaceful and stable Afghanistan, adding that the country is aiding evacuation efforts and providing support.

“This is an opportunity to end the 40-year war in Afghanistan and this moment should not be abandoned.” PM Khan warned that spreading negative propaganda at such a sensitive time can prove to be fatal, especially for the Afghan people.

“Why is terrorism associated with religion?” he asked.

Talking about the 20th anniversary of the 9/11 attacks, the prime minister said that in all these years the world has witnessed the destruction ensued by terrorism. Its threats are still alive today.

He raised concerns over associating terrorism with one religion. “This has enabled far-right, populist, and supremacist groups around the world to propagate, multiply and accumulate influence.”

Pakistan has, over these years, suffered from terrorism that was “planned, supported, financed and orchestrated by state entities from across the border”.

“No other country has suffered more than Pakistan. We have suffered over 80,000 casualties and economic losses in excess of $150 billion.” Despite all this, the country’s resolve remains undeterred when it comes to fighting terrorism and extremism.

He said that Pakistan has offered a number of trade routes to countries in the region.

“The web of rail, road, sea and air links across the SCO region will usher in a new era of enhanced trade, energy flows, and people-to-people exchanges.” These linkages will be strengthened by CPEC.

Proposing a way forward, the premier said that the world should come together to mitigate the adverse economic effects of the coronavirus pandemic.

“We must also advance the agenda of regional connectivity. In this regard, taking the process forward, Pakistan would like to host a virtual conference on the theme ‘Transport Connectivity for Regional Prosperity’ in 2022,” he concluded.

He pointed that a staggering 4.6 million have lost their lives; 223 million have been infected, public health systems overwhelmed, economies worldwide faced downturns and recessions.

He said the poor were hit the hardest everywhere – whether living in the impoverished South or the affluent North and for the first time in 20 years, the world saw a rise in absolute poverty.

Imran Khan shared with the regional leaders how Pakistan, adopted a calibrated strategy of ‘smart lockdowns’ – with a simultaneous focus on saving lives, securing livelihoods, and stimulating the economy, and described it as “a very difficult road to navigate.”

“I also launched a ‘Global Initiative for Debt Relief’ to help create fiscal space for the developing countries to mitigate the negative effects of the pandemic and achieve sustainable development,” Khan said.

He described the advent of the Covid19 vaccine in a relatively short time as a miracle of science and said “we believe science should continue to guide the world’s efforts as it combats the pandemic.”

He however said the attempts to politicize the question of virus origin should be avoided as it was divisive at a time when the world needs to unite. He urged that the vaccine be made available to everyone on an equitable basis, and as a global public good.

Prime Minister Imran Khan took the opportunity to speak on his favourite topic of Climate change and termed it yet another existential threat that the planet earth faces.

He said Pakistan’s contribution to global emissions was negligible, yet it was among the 10 most vulnerable countries and therefore addressing the issue was a key priority of his government.

“We have taken a number of flagship initiatives to mitigate its adverse impacts, including the 10 Billion Tree Tsunami project.

“Our initiatives for ‘Clean and Green Pakistan’ not only aim to protect nature and restore eco-systems but also expand eco-tourism and create thousands of new jobs for our youth.

“We are also committed to shifting our energy mix towards a clean and low carbon trajectory and are targeting 60 percent of our energy to be clean by 2030.”‘

Imran Khan said Pakistan continues to work with the international community towards comprehensive implementation of the Paris Agreement and mobilization of enhanced international climate finance to achieve shared objectives.

The SCO, an eight-member permanent inter-governmental trans-regional Organization, was established in Shanghai on 15 June 2001. Pakistan became an SCO Observer in 2005 and a full member in June 2017 during Astana SCO-CHS Summit. Russia, China, India, Uzbekistan, Kazakhstan, Kyrgyz Republic and Tajikistan are other SCO members.

The Prime Minister’s visit is part of Pakistan’s deepened engagement with Central Asia through ‘Vision Central Asia’ policy, having revitalized focus in five key areas of political ties, trade and investment, energy and connectivity, security and defence, and people-to-people contacts.