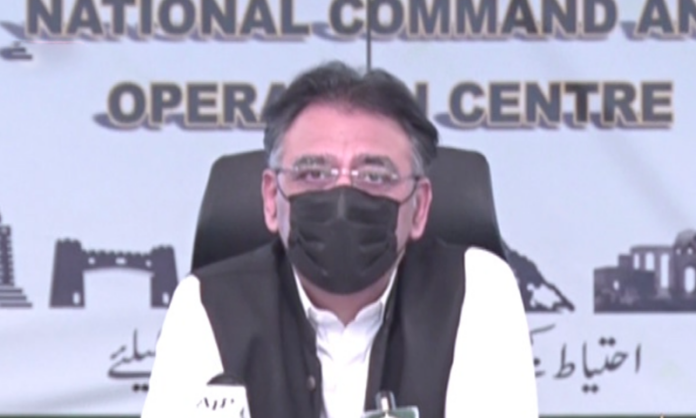 ISLAMABAD: As Pakistan inches closer to its ambitious target of administering Covid-19 vaccination to 70 percent of the eligible population by year-end, the government warned that people who are not vaccinated will not be allowed to work from offices from October.

In a televised message Tuesday, Minister for Planning and Development Asad Umar said unvaccinated people will also not be eligible to enter shopping malls, use public transport or travel by air after the September 30 deadline.

Umar also asked people to keep social distancing in comments that came hours after Pakistan reported a steady decline in cases of coronavirus.

Umar said about 52 percent of the adult population in Islamabad had been vaccinated and other cities should also try to vaccinate at least 40 percent of their eligible population as soon as possible to avoid lockdowns and Covid-19 related restrictions.

Pakistan has reported 1.2 million infections and nearly 27,000 deaths since the pandemic began in February last year.

The minister also announced the lifting of additional non-pharmaceutical interventions in 18 of 24 districts where the restrictions were enforced earlier this month following a surge in daily cases. He said the decision was taken after a decline was observed in new cases in those districts.

On September 4, the National Command and Operation Centre had enforced additional curbs in districts of Punjab, Khyber Pakthunkhwa and Islamabad, including a ban on indoor gatherings, closure of indoor gyms, ban on intercity transport and closure of educational institutions.

Residents in these districts would now have to comply with pandemic restrictions as in the rest of the country but with no additional curbs, Umar said Tuesday.

Schools in these districts could open from September 16 (Thursday) but with 50 percent attendance and on alternate days. Similarly, the intercity transport will also start resume service with 50 percent capacity.

The timing for outdoor dining has also been extended from 10:00 pm to 12:00 am, however indoor dining will remain suspended, the minister announced.

Umar, who also heads the NCOC, said the burden of coronavirus-positive patients on the health facilities was mounting as over 5,300 patients, who needed either oxygen or ventilator, were admitted to intensive care units.

During the last few weeks, the demand for oxygen for medical purposes increased by 100 percent in proportion to the rising number of daily infections. But Umar expressed confidence that the commodity was available in sufficient quantity.

Although the situation had relatively improved, the danger had not subsided yet, he said. Therefore, the need for accelerating the vaccination rollout had become more necessary than ever.

He warned the towns with low vaccination percentages would again be put restrictions. “The government wants to lift the restrictions as soon as possible so that normalcy can return,” he added.

He said the government was spending Rs200 billion on the procurement of the vaccine.

“Our target is to vaccinate at least 40 percent of the eligible population across the country,” he said. Islamabad had already achieved the target, he recalled.

Meanwhile, Punjab Education Minister Murad Raas announced that all public and private schools in the province will reopen on September 16 with a staggered approach.

“Only 50 percent students will be allowed in schools on any given day,” the provincial education minister said in a tweet. “Please follow Covid SOPs issued by the government. Welcome back,” he added.