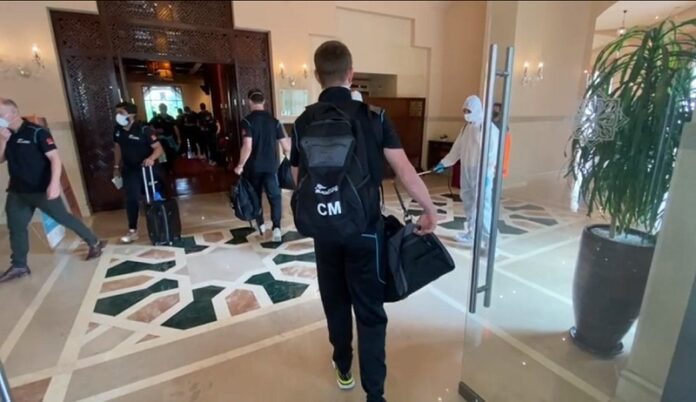 The New Zealand cricket team landed in Pakistan on Saturday to play an extended series of 3 ODIs and 5 T20s, after 18 long years.

The NZ cricketers arrived via a charter flight from Bangladesh at the Islamabad Airport today from where they were scheduled to directly go to the hotel and undergo Covid-19 testing.

After negative test results, the Black Caps were scheduled to start training. An intra-squad match for the New Zealand cricket team is scheduled on September 15.

Rawalpindi’s Pindi Cricket Stadium will be the venue of the 17, 19 and 21 September ODIs, while the iconic Gaddafi Stadium in Lahore will stage the five T20Is from 25 September to 3 October.

While the Rawalpindi ODIs will count towards the ICC Men’s Cricket World Cup 2023 qualification, third position on the ICC T20I Team Rankings will be up for grabs in Lahore.

The ICC World Test Championship winners will return to Pakistan next year to play Test matches.

New Zealand is the first side to visit Pakistan in what will be a bumper 2021-22 season for the local cricket fans and supporters.

Following New Zealand’s tour, England’s men and women sides will play white-ball matches in Pakistan before West Indies are expected to arrive in Karachi in December for three ODIs and three T20Is.

Australia is scheduled to undertake a full tour in February/March 2022.

Pakistan’s three-match home ODI series against New Zealand, which begins on September 17 in Rawalpindi, will not count towards the ICC World Cup Super League, and will instead be played as a standalone bilateral series. The PCB and NZC agreed to this change of status due to the non-availability of the Decision Review System (DRS) for the series.

ESPNcricinfo reported that the series could have gone ahead as part of the Super League even without DRS had the two boards agreed to do so, but New Zealand were not prepared to play a high-stakes series without the use of the technology. The PCB and the series broadcasters, it is learned, were unable to find an ICC-approved provider for the technology in time for the series.

Pakistan have played nine Super League matches so far, and have picked up four wins for a total of 40 points, which puts them sixth on the table as it currently stands. New Zealand have only played three Super League games so far, winning all three and picking up 30 points.

Of the 13 teams in the 2020-23 Super League cycle, eight – hosts India and seven other top-ranked teams – will qualify directly for the 2023 World Cup. The bottom five teams will go into a qualifying tournament alongside the best teams from the lower rungs of the qualification pathway.

ISLAMABAD: Prime Minister Imran Khan has said that the blame on Pakistan for the Taliban's takeover of Afghanistan is illogical. In his interview with RT, Russian...
Read more
Sports

WELLINGTON: New Zealand Cricket officials on Saturday threw a veil of secrecy over the purported security threat that forced the abrupt cancellation of their...
Read more
Top Headlines

PARIS/CANBERRA/WASHINGTON: France plunged into an unprecedented diplomatic crisis with the United States and Australia on Friday after it recalled its ambassadors from both countries...
Read more
Sports