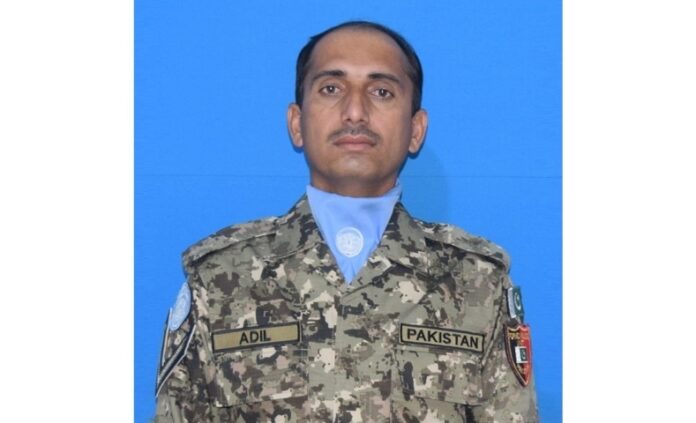 During a peacekeeping mission in Sudan, a Pakistani soldier named Lance Naik Adil Jan embraced martyrdom while on duty.

According to the Inter-Services Public Relations, Jan, 38, a member of the Frontier Corps Balochistan, was part of the UN mission in Darfur responsible for the protection of civilians and facilitating humanitarian assistance in the district.

The soldier was posted at the African Union Hybrid Operation in Darfur. He hailed from Lakki Marwat district, Khyber Pakhtunkhwa.

Pakistan’s Permanent Mission to the United Nations, New York said in a statement that Jan “passed away” on Sept 9, “shortly after being taken ill while on duty in El Fasher”.

The soldier “will be fondly remembered as a dedicated, highly knowledgeable and professional”, it added.

According to the Inter-Services Public Relations (ISPR), as many as 161 Pakistani peacekeepers have so far laid their lives as part of global peace missions for international peace and stability.

Pakistan is one of the longest-serving and largest contributors to UN peacekeeping and has a health personnel unit in Darfur as well.

Pakistan’s first UN peacekeeping mission began in 1960 in Congo and so far more than 200,000 Pakistani soldiers have participated in 60 missions in 28 countries. Pakistan still has more than 7,000 personnel deployed in nine countries as part of 14 ongoing UN missions.

During his visit to Pakistan last year, UN Secretary-General Antonio Guterres had appreciated the contribution of Pakistani women in peacekeeping. “Pakistan is a leader in championing women peacekeepers and an example for other troop contributors,” he had said.