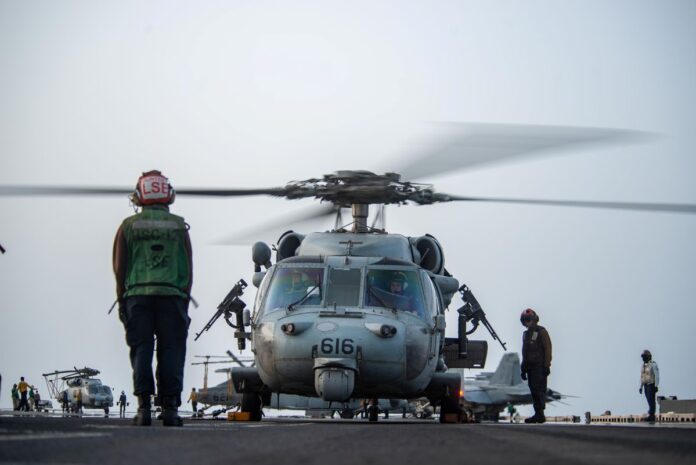 DUBAI: The US Navy is assisting an Israeli-managed petroleum products tanker attacked off Oman with two crew members killed, the US military said late on Saturday, adding the ship was most likely hit by a drone strike.

Mercer Street, a Liberian-flagged, Japanese-owned vessel that was attacked on Thursday, is being escorted by the aircraft carrier USS Ronald Reagan, US Central Command said in a statement.

“US Navy explosives experts are aboard to ensure there is no additional danger to the crew, and are prepared to support an investigation into the attack,” said Central Command, which oversees American military operations in the Middle East and Central Asia.

Israeli Foreign Minister Yair Lapid blamed Iran on Friday for the attack, which killed a Briton and a Romanian, and said it deserved a harsh response. There was no immediate official reaction from Iran to the accusation that it was responsible.

Lapid spoke with US Secretary of State Antony Blinken about the incident on Saturday evening, he said on Twitter.

“We are working together against Iranian terrorism, which poses a threat to all of us, by formulating a real and effective international response,” Lapid said.

Lapid added on Twitter: Iran “repeatedly errs in understanding our commitment to protecting ourselves and our interests.”

US and European sources familiar with intelligence reporting said on Friday that Iran was their leading suspect for the incident.

Al Alam TV, the Iranian government’s Arabic-language television network, cited unnamed sources as saying the attack on the ship came in response to a suspected, unspecified Israeli attack on Dabaa airport in Syria.

The vessel is managed by Israeli-owned Zodiac Maritime. The company said on Friday the vessel was sailing under the control of its crew and own power to a safe location with a US naval escort.

Iran and Israel have traded accusations of attacking each other’s vessels in recent months.

Tensions have risen in the Gulf region since the United States reimposed sanctions on Iran in 2018 after then-President Donald Trump withdrew Washington from Tehran’s 2015 nuclear deal with major powers.

The United Kingdom Maritime Trade Operations, which provides maritime security information, said the vessel was about 152 nautical miles (280 kilometres) northeast of the Omani port of Duqm when it was attacked.

According to Refinitiv ship tracking, the medium-size tanker was headed for Fujairah in the United Arab Emirates, from Dar es Salaam in Tanzania.