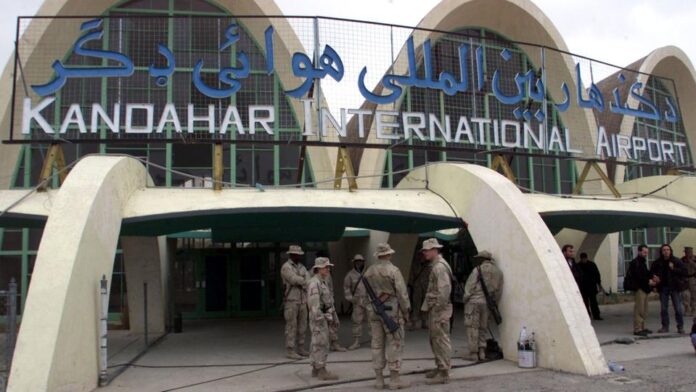 “Kandahar airport was targeted by us because the enemy were using it as a centre to conduct air strikes against us,” Zabiullah Mujahid, a Taliban spokesperson, told Reuters.

Afghan government officials said the rocket attacks forced authorities to suspend all flights and that the runway was partially damaged. There were no immediate reports of casualties, the officials said.

The Taliban have for weeks launched withering assaults on the outskirts of Kandahar, stirring fears that the insurgents were on the verge of capturing the provincial capital.

Kandahar’s air base is vital to providing the logistics and air support needed to keep the militants from overrunning Afghanistan’s second-biggest city.

The attack on the airport came as the Taliban inched closer to overrunning two other provincial capitals — Herat in the west and Lashkar Gah in the south.

The Taliban’s significant territorial gains during the final stages of the US military withdrawal have largely been in sparsely populated rural areas.

But in recent weeks they have brought increasing pressure on several provincial capitals and seized key border crossings.

The capture of any major urban centre would take their current offensive to another level and fuel concerns that the army is incapable of resisting the Taliban’s battlefield gains.

The government has repeatedly dismissed the Taliban’s steady territorial gains over the summer as lacking strategic value.

Prime Minister Imran Khan on Thursday has said that the country will provide all means of help to foreign investors to create ease in...
Read more
Top Headlines

State Department Spokesperson Ned Price has offered clarification on what US Secretary of State Antony Blinken meant when he said that Washington will reassess...
Read more
- Advertisment -