PML-N to hold sit in at Constitution Avenue if AJK elections are rigged, says Maryam 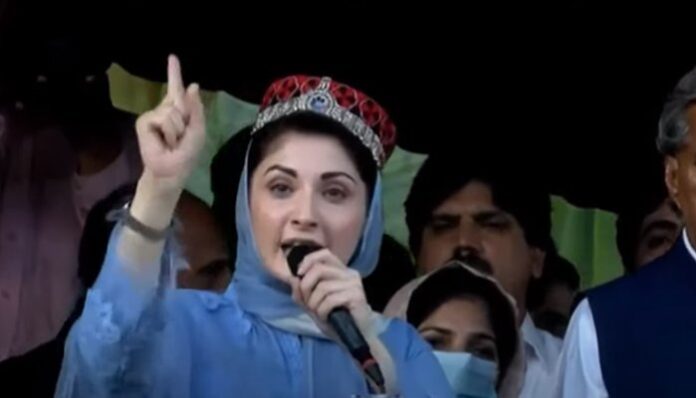 Pakistan Muslim League-Nawaz Vice President Maryam Nawaz said on Monday that the PML-N would call for a sit-in at Constitution Avenue in Islamabad if there was any rigging during the July 25 Azad Jammu and Kashmir elections.

“We will not accept the results if elections are rigged,” she said while addressing a rally ahead of the polls in AJK’s Haveli, reported Geo.

“For how much did Sardar Tanvir Ilyas buy you [Imran Khan] and for how much did you try to buy the vote of Kashmiris through your new ATM?” she asked.

Maryam alleged that PM Imran Khan had “smuggled his new ATM” Ilyas to AJK from Islamabad. “Ilyas had bribed a government official by giving him Rs1 billion, think what he must’ve given to Imran Khan.”

The PML-N vice-president said “despite using government funds” for small rallies, the premier’s party was unable to attract people, and following their “public humiliation”, Pakistan Tehreek-e-Insaf candidates are asking PM Imran Khan to not come back into their constituencies.

“His candidates are saying don’t come back or we might not even get four votes,” she said.

Speaking about the Afghan ambassador’s daughter’s alleged abduction, Maryam said it was the PTI-led government’s “failure.”

The PTI would form government in AJK after defeating the Pakistan Muslim League-N and other political party candidates, he said while talking to a private television channel.

The PML-N leaders did not have a vote bank in AJK, he stated.

Maryam Nawaz and her party candidates would face defeat in the upcoming election of AJK, he added.

Voicing serious concerns over the negative agenda of PML-N observed during the election campaign of AJK, he said it is unfortunate that Maryam was following the narrative of Modi’s government.

Replying to a question about the Dasu incident, he said anti-Pakistan forces are trying to create trouble. He said that work on the Dasu project has been started.