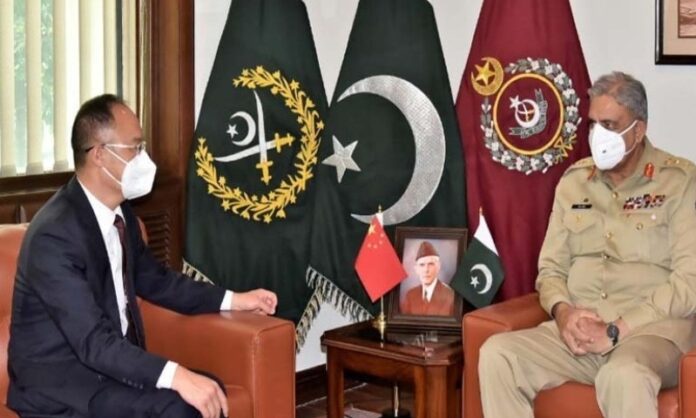 Chinese Ambassador to Pakistan Nong Rong and Chief of Army Staff Gen Qamar Javed Bajwa met at the General Headquarters on Monday and stressed the need to “thwart designs of all inimical forces challenging the resolve of Pakistan and China, particularly strategic cooperation between the two sides.”

The above was said in reference to the recent bus tragedy in Kohistan, according to Inter-Services Public Relations (ISPR).

The meeting was held in the backdrop of the July 14 incident in which at least nine Chinese nationals and four locals were killed and 28 others sustained injuries when a coach carrying them to an under-construction tunnel site of the 4,300-megawatt Dasu hydropower project fell into a ravine in the Upper Kohistan area after an explosion.

The army chief extended heartfelt sympathies and deepest condolences to the government of China and its people on the incident, underlining that “Pakistan Army greatly values its brotherly relations” with its time-tested friend.

The ISPR said both sides agreed on the need for continuous engagement and coordination for peace and stability in the region.

Following the incident on July 14, the Chinese Foreign Ministry had issued a statement, saying “China is shocked & saddened at reports of casualties in the incident in Pakistan’s Khyber Pakhtunkhwa Province. We mourn for those who lost their lives & express sympathy to their families & the injured.”

It had also advised the Chinese living in Pakistan to “stay on alert, pay close attention to the local security situation, strengthen security protection, take strict precautions, and stop going out unless necessary”.

Later, a team comprising at least 15 Chinese investigators had also arrived in Pakistan and joined the officials probing the incident.

Interior Minister Sheikh Rashid had on July 17 said the investigation was in the final stages and the highest institutions of Pakistan were probing it. He had confirmed that 15 individuals from China were included [in the investigation] as well.

“We completely reassure the Chinese government that these culprits, hidden hands and enemies of CPEC and China-Pakistan friendship will never be forgiven at any cost,” the minister had said.