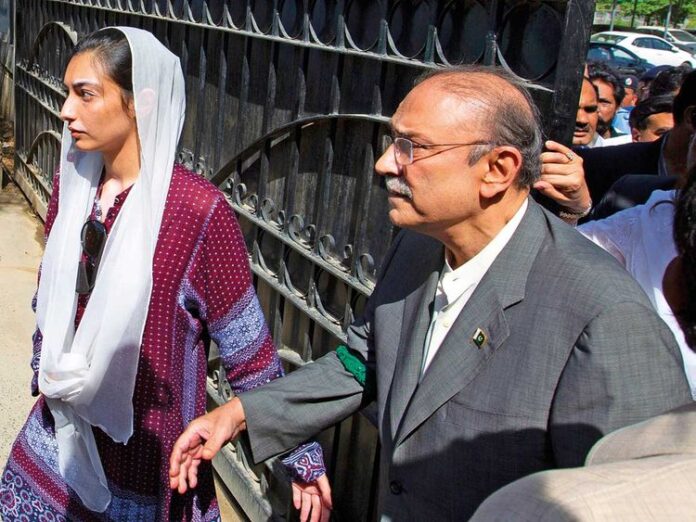 ISLAMABAD: Former president and Pakistan Peoples Party co-chairman Asif Ali Zardari on Tuesday said the government should take parliament into confidence on its alleged contacts with the state of Israel.

Talking to reporters outside the National Assembly building where he had come to attend the budget session, Zardari called on the government to take the parliament into confidence if there is any attempt to establish contacts with Israel.

Pakistan does not recognise Israel and maintains no diplomatic relations with it. The Pakistani passport is the only one in the world that explicitly states that you can travel anywhere using the document except Israel.

On the deteriorating security situation in Afghanistan, the former president warned that it was precarious and hazardous and could impact Pakistan.

He was of the view that it was necessary to keep an eye on Afghanistan and “doing some thinking on the Afghan question” which he said was the need of the hour.

Since May, the Taliban have launched major offensives targeting government forces across the rugged countryside. On June 22, the militant group captured Afghanistan’s main border crossing with Tajikistan, with security forces abandoning their posts and some fleeing across the frontier.

The seizure of Shir Khan Bandar, in the far north of Afghanistan, about 50 kilometres from Kunduz city, was the most significant gain for the Taliban since the US began the final stage of its troop withdrawal in May to exit the country after two decades.

Zardari further asked the government to take the parliament aboard on every matter.

Earlier in the day, he left the accountability court within minutes after the judge allowed him to leave during a hearing in the fake bank accounts reference against him.

Zardari’s counsel, Farooq H. Naik, presented the bail order to the accountability court. He said that Islamabad High Court had granted bail to the former president in this case.

The Federal Investigation Agency had named Zardari, his sister Faryal Talpur, Omni Group chief Anwar Majeed, his sons and over 10 others as suspects in an interim charge sheet filed in a banking court in August 2018.