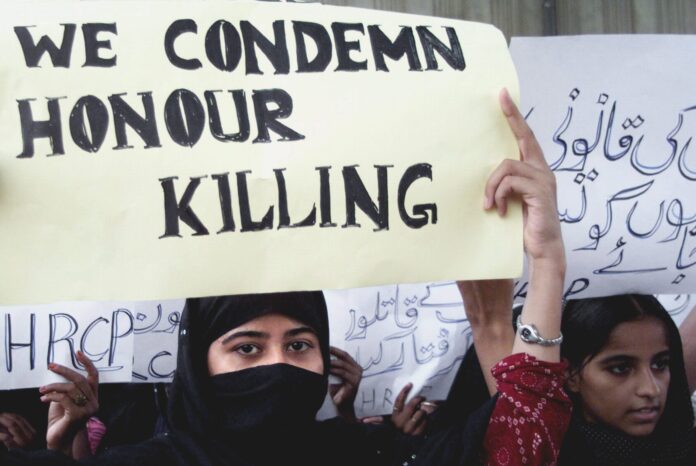 Sacrificing the life of a girl to save their honor has been an evil increasingly marring Pakistani households. The male members of a family prefer to kill the girl who is found eloping with a boy whom she wants to marry out of her choice.

In Pakistan, many women are not allowed freely to marry a person of their choice though the religion puts no strict restrictions on it. Observers say that given the insular attitudes of most Pakistani parents and deeply rooted cultural norms, a girl is forcefully married to someone as soon as she hits puberty or finds herself in a relationship. If she tries to refuse the proposal by protesting against it or leaves her home to save her life, she is found being humiliated to death.

The ruthless practice of honor killing is not only prevalent in Pakistan but also the Pakistanis who live overseas also seem to follow this tradition, making sure they adopt everything they leave behind in their home country.

One such incident by a Pakistani family was reported in Italy last week where a girl named Saman Abbas, 18, was alleged to be killed by her family for honor because she objected to her parent’s decision of making her married to her cousin, while she was interested in someone else whom she found in Italy and wanted to spend her life with.

Investigators of the crime scene deduced that her family hatched the plot against her by conniving with her relatives who were planning for her forced marriage since autumn last year. When Saman rebelled against their decisions and fled the home, they decided to shut her voice forever by attempting to kill her.

The police claimed that the CCTV captured the scene that proves the deliberate killing of Saman by using proper tools of murdering used by her relatives with the support of her parents who handed her to them and returned back to Pakistan. It is found that Saman’s body is missing and must have been buried by her parents and relatives to escape any disgrace and charges of murder.

This is one out of several stories of honor killings that Pakistani girls are subjected to and have to live with wounds of their family’s injustice on their hearts forever. Around 1,000 women become victims of honor killings every year in Pakistan.

Another report found with BBC published in 2016 stated the reasons of honor killings in Pakistan. “The predominant causes of these killings in 2015 were domestic disputes, alleged illicit relations and exercising the right of choice in marriage,” the report said.

Also, “most of the 1096 victims were shot, but attacks with acid were also common”, the report noted.

Zohra Yusuf, the former chairperson of the non-governmental Human Rights Commission of Pakistan (HRCP) said, “feudal orthodoxy and conservative norms have deep roots in Pakistan. Men want to control women and they treat them as their ‘property.’ They don’t allow any freedom to women,” Yusuf claimed.

She further added that countries like Afghanistan and India are facing the same problem. “In Pakistan, it is not only individuals that commit ‘honor killings;’ even tribal courts sentence women to death for ‘dishonoring’ a family or a tribe,” Yusuf observed.

With the rates of honor killings on the rise, activists urge that the government should launch a strong crackdown against the perpetrators of such violence by implementing laws in their true letter and spirit. It should also make new laws and amend the existing ones, keeping in view the grim circumstances that have been contributing to high rate in cases of honor killings.

Seeing the dismal state of affairs, experts say that it has become evident that the government has failed in formulating policies on the issue and defining a regulatory framework to charge the offenders with punishments. It has been observed that the conviction rate in case of honor killings is just 2.0% while the acquittal rate is 20.9%. The statistics mentioned underline the fact that the government is just relying on obsolete laws that have lost sense of implementation to handle the unabated violence and have left the innocent victims on the mercy of law enforcement agencies who prefer to bury the case for it to never surface again.

The bill that was passed by legislators in 2016 to stop honor killings in Pakistan and subject the perpetrators to meet punishment lacks some basic requirements.

“I strongly want to say that this bill still needs a lot of amendments,” said Sherry Rehman, member of the Senate. “That culture of impunity still has to go. The woman who has not been murdered, the survivors of such crimes have not been provided with any recourse. This bill only deals with murder and death,” Sherry Rehman proclaimed when asked about the validity of the bill.

“This still does not make honor killing a crime against the state, which is what we have also been working for,” she added.

The police that are responsible for thorough investigation and registration of the cases often ask the families to settle dispute on their own instead of washing their dirty linen in public. This makes the issue less substantive to be easily raised and allows the cases to remain unreported despite their surge.

Unfortunately, the government is not doing anything to curb this mindset demonstrated by the police officials who are the frontline leaders to fight injustice against the criminals.

With the rates of honor killings on the rise, activists urge that the government should launch a strong crackdown against the perpetrators of such violence by implementing laws in their true letter and spirit. It should also make new laws and amend the existing ones, keeping in view the grim circumstances that have been contributing to high rate in cases of honor killings.

Observers further maintain that there are a host of reasons responsible for this offensive act and need to be decoded by the investigation teams by introducing them to modern methods of investigation and registration of the crime. The provision of emergency or service centers to such women who survive the attack also need to be established on priority basis.

Experts reiterate that the collusion between the offenders and the witnesses and the settlement of the dispute outside the courts without any legal proceedings make the culprits immune to commit such crimes. There is a need to encourage women to step forward and stand headstrong against such practices that hinder them to see justice and meet their culprits convicted under the law.

Mehmil Khalid Kunwar
The writer is a polymer engineer with a profound interest in politics. She works on social issues and gender bias. She can be reached on Twitter @mehmilkhalid