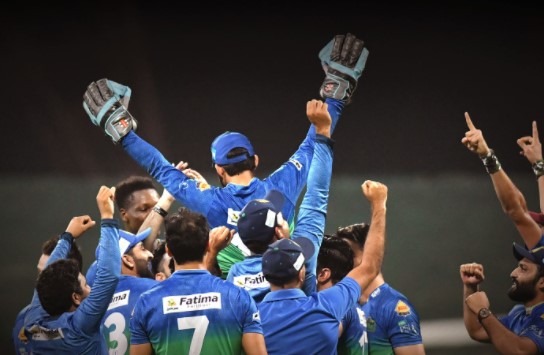 Multan Sultans triumphed over Peshawar Zalmi in the final to win their maiden Pakistan Super League in a see-saw kind of game at the Sheikh Zayed Cricket Stadium in Abu Dhabi.
According to Geo News, at the start of the innings, Zalmi made a blistering start courtesy Kamran Akmal’s 36.
The Zalmi needed a herculean effort by one of their batsmen to chase the record-breaking target in the PSL final and Akmal gave hope to his team till the fifth over.
Zalmi were 36 for the loss of no wickets at that point and all those runs were scored by the veteran wicketkeeper.
Hazraullah Zazai, the other opener, was looking to join the party when he hit Blessing Muzarabani for a six from the first ball of the sixth over. However, the very next ball Zazai was removed by the Zimbabwean to give Multan their first wicket.
Imran Khan then bowled a wicket-taking maiden sixth over to put Zalmi further under pressure. The bowler in the over removed the dangerous Akmal from the very first delivery.
Then Rilee Rossouw, who had started with the bat for Multan, removed Jonathan Wells with a run out during the 10th over to tilt the final in Multan’s favour.
In the 11th over, Imran Khan removed Shoaib Malik but the decision was overturned after replays showed that the pacer had overstepped.
The mistake proved to be too costly for the Multan as Malik then made the Sultans pay for their mistake.
West Indian Rovman Powell was giving good company to Malik but he was removed by Muzarabani during the 15th over.
While Multan knew that Malik was key for them if they wanted to lay their hands on their first PSL trophy.
And it was the experienced Sohail Tanvir who removed the veteran all-rounder from the first ball of the 16th over. But Malik had taken his side far enough to make Zalmi dream at the point. They needed 70 runs from the last 29 balls at that point.
After Malik’s dismissal, Sherfane Rutherford decided to charge the Multan bowlers.
Once again, it was the experience that counted in the situation.
Imran Tahir, during the 17th over, removed the dangerous Rutherford, Wahab Riaz and Mohammad Imran to end the little hope that Zalmi had of clinching their second PSL title.
In the next over Imran Khan, took Zalmi’s ninth wicket to take his side closer to the finish line.
Getting 56 runs in the last 16 balls proved too much for the last two batsmen of the Zalmi.
Multan triumphed over Zalmi by 48 runs to win their first PSL title.
MULTAN SULTANS’ INNINGS:
Earlier, a 98-run partnership between Sohaib Maqsood and Rilee Rossouw powered Sultans to 206-4 run after their team was asked to bat first by the Zalmi.
The first over of the final was bowled by Sameen Gul and it could have been a maiden had he not bowled a wide off his first ball.
While the first boundary was hit by Mohammad Rizwan against Mohammad Irfan in the second over. The Sultans captain was also the one to hit the first six of the final.
The openers Rizwan and Shan Masood were struggling to take off against the Irfan and Sameen duo till the third over of the match. But it was in the fourth over that the openers found some flow and started finding boundaries easily.
However, it was youngster Mohammad Imran who stood up for his team and removed Masood and Rizwan in the 9th and 11th over. Masood departed after making 30 while Rizwan was removed for 30.
The dismissals would have given hopes to Peshawar that their bowlers would stop the flow of runs and take more wickets to put the pressure back on Multan.
However, Sohaib Maqsood and Rilee Rossouw did not give any space for the Zalmi bowlers to capitalise on the two quick wickets.
The duo built a partnership of 98 runs and by the time Rossouw was dismissed in the 18th over, Multan had crossed 180 runs. The South African was dismissed by Gul shortly after completing his half-century.
On the very next ball, Gul removed Johnson Charles for a duck to put Sultans four down.
In the last over, Maqsood and Khudhil Shah hit Ammad Butt for 21 runs to take Sultans to 206 for four.
Maqsood ended the innings as Multan’s highest run-scorer with an unbeaten 65.
PLAYING XI:
Multan Sultans: Shan Masood, Mohammad Rizwan (c & wk), Sohaib Maqsood, Rilee Roussouw, Johnson Charles, Khushdil Shah, Sohail Tanvir, Imran Tahir, Blessing Muzarabani, Imran Khan, Shahnawaz Dahani.
Peshawar Zalmi: Hazratullah Zazai, Kamran Akmal (wk), Jonathan Wells, Shoaib Malik, Rovman Powell, Sherfane Rutherford, Amad Butt, Wahab Riaz (c), Sameen Gul, Mohammad Irfan, Mohammad Imran.

WASHINGTON: National Security Advisers of Pakistan and the United States have agreed to "sustain the momentum in Pak-US cooperation" at their follow-up meeting in...
Read more
Sports

They spit. They wait. They hope. About 30,000 people from scores of nations are spitting into tiny plastic vials at the Olympics in a daily...
Read more
HEADLINES

KARACHI: The Sindh government on Friday decided to impose an immediate lockdown till August 8 as the province continues to battle the dangerous surge...
Read more
NATIONAL