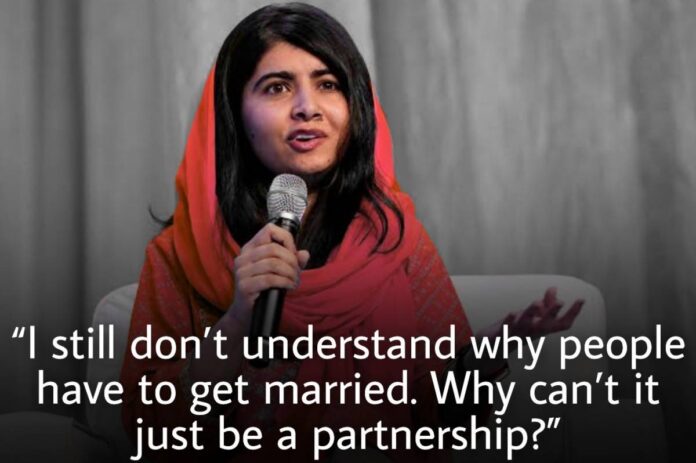 Have you been spending unhealthy lengths of time on social media arguing with humanists on forums managed by them? Are you looking for a way to cut down on internet time, but do not want to be thought of as a coward fleeing the battlefield? If so, look no further and let me tell you about an honourable way of getting kicked out of these forums. All you need to do is post this simple thought on one of these pages: ‘Sex outside of marriage is exploitative of women even if they are not conscious of it.’ This works every single time. Having lost count of the number of social media groups that have banned me for posting this, I know what I am talking about.

Talking of marriage and morals, Malala Yousafzai is back in news after her comment about having no idea why couples must sign marriage papers instead of simply staying in partnerships. Mr Yousafzai was quick to issue the standard clarification, that his daughter’s comments were taken out of context. Malala’s fans are expected to love her even more after this last statement from her, while her detractors are hardly going to fall in love with her after the clarification. So, I have no idea why Mr Yousafzai is even bothering.

Forgetting Malala for a moment, let us focus on the issue. The marriage vs. partnership (or ‘relationship’) debate is an old one. Of course, it cuts no ice with the humanists if they are told that premarital sexual relations are prohibited by the Almighty. What do they care about such prohibitions when they do not believe in the Almighty in the first place? They grant that extramarital relations are wrong, there being an aggrieved party (the spouse); but they see nothing wrong with consensual premarital sex. They fail to realize that premarital habits have a way of spilling over into married life.

Another shortcoming of the humanists’ position concerns their axiom that a person is entitled to do with her body whatever she pleases so long as she does not harm anybody. This sounds reasonable until one recognises that it is entirely possible for a woman to harm herself without being conscious of the fact. Consent alone does not preclude an activity from being damaging to a woman. Any mention of this troubles the humanists immensely – champions of human rights that they are. So, whenever you bring this up you get to read some amusing responses, before getting banned.

For a long time, the movement of ‘civilization’ has been such that economic implications have constantly been pushing the age of marriage upwards, with a corresponding increase in acceptance of premarital relations as a norm in more and more circles. Men being men, they believe that the arrangement suits them just fine.

It is very disconcerting for men on these forums to even entertain the idea that they could be guilty of exploiting women. So they reject it out of hand. Some of them try to laugh it away but their performance is not the least bit convincing. And they know it, hence the banning routine. Women on these forums deny being exploited even more emphatically. One woman was so livid at the suggestion that she told me that far from being exploited, it was she who had exploited many men sexually. I have heard some curious arguments in support of questionable practices, but none stranger than this one.

Malala may not have noticed it, but men and women are very different physically. The differences in their emotions and psyches are even greater. Such is the intensity of the maternal instinct in women that few of them can remain completely sane without becoming mothers. For various reasons, parenthood does not nearly have the same effect on a man’s career that it has on that of a woman.  Therefore, for most men the family vs. career question never really arises, which, as a rule, cannot be said about women. The difference that parenthood brings only starts with childbearing, which takes a tremendous toll on the female body. This is followed by the raising of children part that demands a great deal more energy from the mother than from the father. It is not for nothing that nature has put an age limit on women conceiving. Men, on the other hand, can become fathers till much later. These are facts of life that must be faced, however unpleasant on unfair they may sound.

For a long time, the movement of ‘civilization’ has been such that economic implications have constantly been pushing the age of marriage upwards, with a corresponding increase in acceptance of premarital relations as a norm in more and more circles. Men being men, they believe that the arrangement suits them just fine. Even in the most traditional societies the average age of tying the knot is likely to increase further, and with it the ‘convenience’ that free love brings. It is a safe bet that men will not be complaining about it. From the look of things, neither will more and more women. But that will not mean that the practice is not to the detriment of both parties, especially women because they have a whole lot more to lose than men.