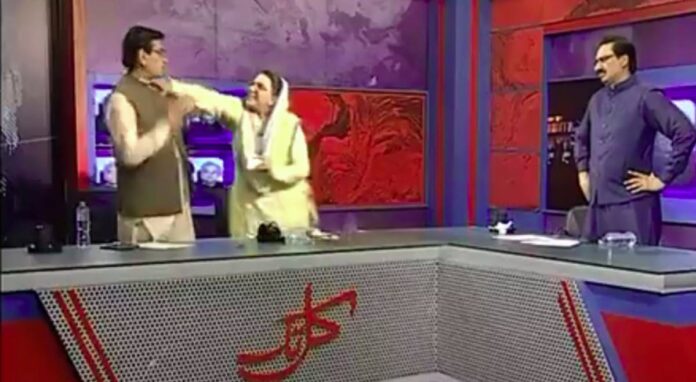 Video clips of the programme — Kal Tak, hosted by journalist Javed Chaudhry — show the two shouting at each other and hurling claims of corruption as Pakistan Muslim League-Nawaz leader Uzma Bukhari, a third guest, and Chaudhry watch on.

In the video, Mandokhail tries to grab Awan’s arm to defend himself. However, other people present on the set quickly intervene before the situation escalates.

The incident comes merely a month after the adviser flayed a lady assistant commissioner after she found shopkeepers at a government Ramadan market in Sialkot selling “substandard” food items.

In response to the incident, Awan defended her actions by claiming that “one-sided” propaganda was being carried out as the clip did not include what she said was the vulgar language used by Mandokhail against her and her late father.

“The picture being painted about the argument with Mandokhail during Javed Chaudhry’s TV show highlights only one side of the story,” she said in a series of tweets.

“Such rude individuals have nothing to do with politics and ethics. These people are a blemish on the face of society and politics,” Awan said, announcing that legal action will be taken against Mandokhail’s conduct.

“Express TV should release the complete footage of the incident.”