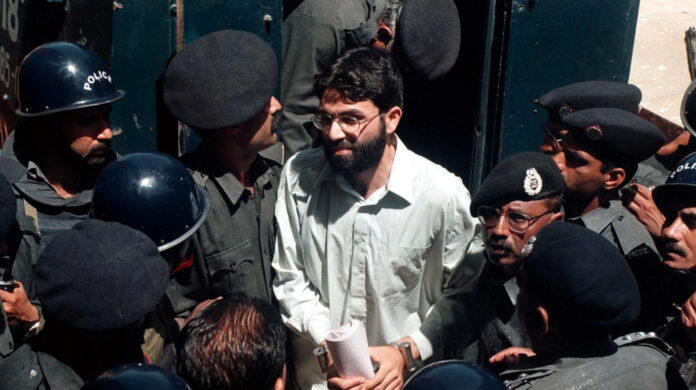 ISLAMABAD: The Supreme Court on Wednesday accepted the application of the prosecutor general Sindh while granting two weeks’ time for arguments in Daniel Pearl murder case.

A three-member bench of the apex court headed by Justice Mushir Alam is hearing a review petition in the matter as prosecutor general Sindh sought more time to deliver arguments against release of Ahmed Omar Saeed Sheikh and other suspects.

It is pertinent to mention that United States has expressed ‘deep concerns’ over the acquittal of the accused in the Pearl murder case, asking the government to review its legal options.

On March 25 the top court has resumed hearing of Sindh government’s petition involving Sheikh, the principal accused in the murder of Wall Street Journal journalist Pearl.

A three-judge Supreme Court bench consisting of Justice Umar Ata Bandial, Justice Sajjad Ali Shah and Justice Munib Akhtar will take up the Sindh government’s application against the Dec 24, 2020, order of the Sindh High Court declaring as illegal the June 29, 2020, provincial government notification of placing all the accused on the IV Schedule of the Anti-Terrorism Act of 1997, pursuant to Section 11EE, with an observation that none of the accused were “enemy aliens” as contemplated under Article 10(9) of the Constitution and as such their detention under this provision was found to be illegal and unlawful.

Appearing before the three-member bench of Justice Mushir Alam on Wednesday, Sindh prosecutor general requested the court to grant him time on the grounds that he was unable to deliver more arguments in the case owing to some work-related engagements.

A member of the bench Justice Sardar Tariq Masood observed saying more relief could not be given in the matter in hand as it was a review petition. Later, accepting the prosecutor general Sindh application the bench adjourned hearing of the matter for two weeks.

It is pertinent to mention that during last week, the top court has issued notice to the Sindh government over a complaint of Pearl murder case accused with regard to lack of facilities in detention. “Accused persons Salman Saqib and others have complained that they were not being provided medical and other facilities at the apartment in which they have been detained,” the counsel of the accused persons contended before the court.

Earlier, a three member bench of the apex court headed by Justice Umar Ata Bandial heard the plea saying, “We are issuing a notice to the government over the complaint.”

“Ahmed Omer Saeed Sheikh is not being allowed movement in the apartment”, defence counsel Mehmood A Shaikh said. Whereas Additional Advocate General Punjab Faisal Chaudhry assured the court that the movement ban on Sheikh will be relieved. Sheikh’s counsel further said that his client was only permitted to meet his wife and son, while his mother-in-law, uncle and aunt were not being allowed to visit him. Likewise, the attorney general for Pakistan assured permission to the mentioned relatives of Sheikh.