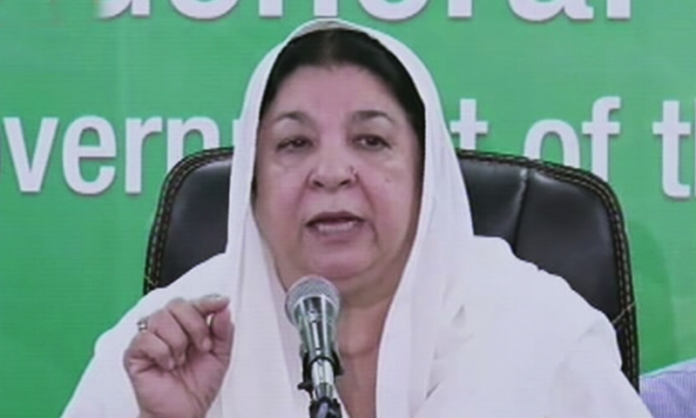 LAHORE: Punjab Health Minister Dr Yasmin Rashid on Sunday said people should thank Allah Almighty for being kind to them in comparison to India where the coronavirus pandemic has wreaked havoc, adhere to the health guidelines and register for vaccination.

Talking to reporters in Rawalpindi, Dr Yasmin said that the Health Ministry urges people to sign up for the shots as they are the only way to combat the contagion disease.

“The Punjab government is injecting vaccine to more than 140,000 people on a daily basis and in the coming weeks, the capacity will be enhanced to 450,000,” she added.

The minister said Punjab is leading in vaccination campaign as the province has administered its 2.8 million shots so far.

She said that a vaccine camp has already been set up at the Lahore Press Club where journalists, who she said are frontline warriors, will receive the vaccine doses.

She clarified that the AstraZeneca vaccine’s first dose is being administered while the Sinopharm vaccine’s second dose is being allocated, and people should make sure of their complete vaccination.

Yasmin said that restrictions during the last days of the holy month of Ramadan reduced the coronavirus positivity ratio in the province and for the first time, less than 1,000 cases were reported in Punjab.

She announced that six new vaccination centres will be set up in the province.

Earlier, Punjab reported 901 new cases of coronavirus with 29 deaths in the last 24 hours.

It also urged the people to follow guidelines for their protection and cover their faces with masks.

People should wash their hands several times a day to protect themselves from the disease.