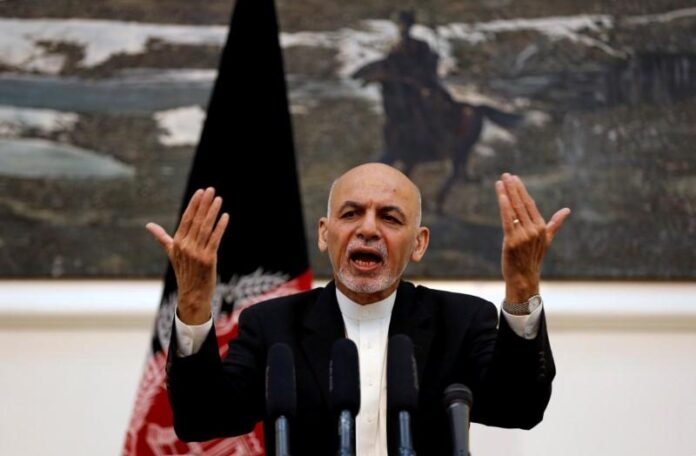 KABUL/ISLAMABAD: As the United States has started formally withdrawing troops from Afghanistan, beginning the end of what President Joe Biden called “the forever war”, President Ashraf Ghani emphasised the “need” for a decision on peace by the regional players and Europe to “get Pakistan on board” on the talks with the Taliban.

“Peace will primarily be decided upon regionally, and I believe we are at a crucial moment of rethinking. It is first and foremost a matter of getting Pakistan on board,” Ghani told Der Spiegel, an online German news portal, in an interview on Friday.

“The US now plays only a minor role. The question of peace or hostility is now in Pakistani hands.”

With Washington scheduled to pull out from the war-torn country by September 11, the Taliban are poised to return to power on the battlefield or through peace talks where they hold most of the cards.

Pakistan helped bring the Taliban to the table, ultimately resulting in a deal. Foreign Minister Shah Mehmood Qureshi was also present at the peace deal signing in Doha in February last year, warmly congratulating both sides.

But in Kabul, concerns are mounting among the incumbent administration because the complete withdrawal of foreign troops could leave the country vulnerable to a Taliban takeover two decades years after it was ousted in a US-led invasion but they still control wide areas.

“Pakistan operates an organised system of support. The Taliban receive logistics there, their finances are there and recruitment is there,” he claimed even as Afghanistan remains breeding ground for terrorist networks, including proscribed Tehreek-e-Taliban Pakistan (TTP) and the so-called Islamic State (IS), responsible for attacks inside Pakistan.

“The names of the various decision-making bodies of the Taliban are Quetta Shura, Miramshah Shura, and Peshawar Shura — named after the Pakistani cities where they are located. There is a deep relationship with the state,” he claimed.

Earlier this week, after a meeting with Army Chief Gen Qamar Javed Bajwa in Kabul, Ghani had said Pakistan was not in favour of the Taliban returning to power in his country.

“President Ashraf Ghani attached great importance to the role of the regional countries particularly Pakistan in establishing peace in Afghanistan and the country’s influence on the Taliban,” the Afghan Presidential Palace said in a statement issued at the time.

In response to a question, Ghani reiterated that Gen Bajwa “clearly assured me that the restoration of the Emirate or dictatorship by the Taliban is not in anybody’s interest in the region, especially Pakistan”.

Pakistan, too, has time and again urged the Taliban to remain engaged in the Afghan peace process and said so again last month after the group said it would now shun summits about Afghanistan until all foreign forces leave.

When asked to comment on the prospects of a future security agreement between the two neighbours to secure peace in Afghanistan, the president said: [Any such development will] most certainly [be] an important key. But my goal is the neutrality of Afghanistan.”

“We don’t want a new protecting power, and we don’t want to be part of regional or international rivalries.”

Ties between Kabul and Islamabad have been historically tense but have soured even more in the past 20 years. Kabul accused Pakistan of backing the Taliban. Pakistan, analysts say, does not want an unfriendly government in Kabul — a government that is more friendly with India.

Pakistan, which hosts close to 3 million Afghan refugees and economic migrants, has built 90 percent of a fence along its 2,500 kilometers (1,500 miles) border with Afghanistan and would hopefully be completed by September, he said.