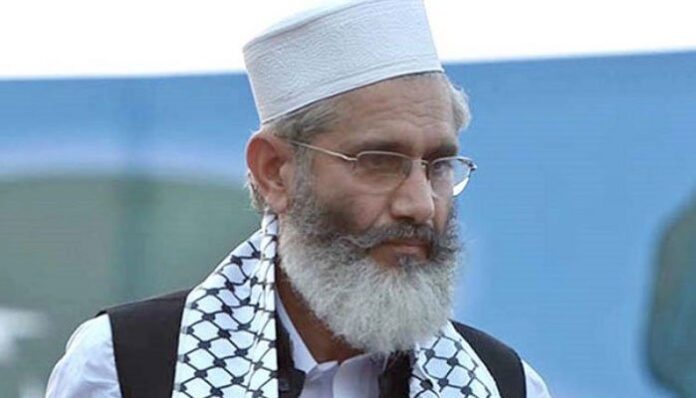 LAHORE: Jamaat-e-Islami (JI) Ameer Sirajul Haq on Sunday announced to stage a protest demonstration across the country on May 21 against Israeli aggression against innocent Palestinians.

The JI chief appealed to the nation to join the protests for the rights of Palestinians and said that human tragedy is arising on daily basis in Palestine, adding that the United Nations and American and European human rights advocates have become deaf and dumb.

Sirajul Haq said that the Muslim Ummah should stand with the oppressed Palestinians and the rulers of the Muslim world have to go beyond statements and tweets.

He went on to say that the Muslim countries should formulate a plan of action to protect the lives, property and honour of the citizens of Gaza.

Sirajul Haq will lead a major protest in Islamabad on May 21.

Earlier, Foreign Minister Shah Mahmood Qureshi on Friday had said that the whole nation, including all the political parties of Pakistan, are united when it comes to the issues of Kashmir and Palestine.

In a telephonic conversation with JI chief Sirajul Haq, who had phoned him, the foreign minister had said that the whole Muslim Ummah is concerned over the aggression against the Palestinian worshipping Muslims during the holy month of Ramadan.

The foreign minister had said that Al-Aqsa Mosque is one of the holiest sites for Muslims as well as the first Qibla for them, so its protection is part of their faith.

Qureshi had apprised the JI chief of the prime minister’s ongoing contacts with the international community to seek an end to ongoing aggression against Palestinians and seek peaceful resolution of the dispute.

The foreign minister had said that the Executive Committee of the Organisation of Islamic Cooperation (OIC) had convened the foreign ministerial level emergency meeting to devise a joint strategy on the Palestinian situation.

Qureshi had said that he would also address the session via video link and apprise the participants of the concern and perturbation found among the Pakistan nation.

He had also apprised Siraj of the diplomatic efforts made by Pakistan so far on the Palestine issue.

The JI chief had assured the foreign minister of his party’s all-out cooperation on the Palestinian cause.