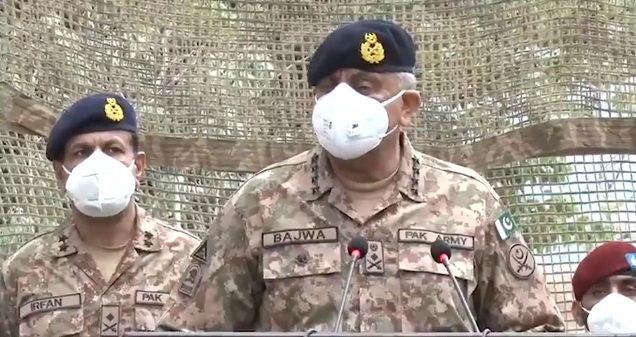 ISLAMABAD: Army Chief General Qamar Javed Bajwa on Friday vowed not to let militants disturb the peace in the areas along the Western border with Afghanistan, the Inter-Services Public Relations (ISPR) said.

The army chief celebrated the first day of Eidul Fitr (Thursday) with troops stationed along the Line of Control (LoC), APP reported. On arrival, he was received by Rawalpindi Corps Commander Lt Gen Azhar Abbas at the de facto border. There, he also offered Eid prayers with troops.

Speaking at the occasion, Gen Bajwa lauded the high morale, devotion, and operational preparedness of the troops, said the ISPR press statement.

He also appreciated the formation for all-out assistance extended to civil administration to combat the Covid-19 pandemic and stressed the need to exercise maximum caution.

“Security, safety, and well-being of people of Pakistan is our responsibility. Pakistan Army will do everything to live up to the expectations of our nation,” the chief said.

Gen Bajwa also paid tribute to the martyrs for their sacrifices. “As soldiers, we take pride to be on duty and defending the motherland irrespective of the front or occasion,” he said.

He further said: “On this Eid day we must not forget the valiant struggle of brave people of [Indian-occupied] Kashmir.”

It was time to end this human tragedy and resolve the dispute as per aspirations of the people of the held region and UN Security Council (UNSC) resolutions, Gen Bajwa concluded.

The army chief spent the second day of Eid with troops deployed on the Western border along Timergara city of Lower Dir district in Khyber Pakhtunkhwa (KP).

During the visit, he was briefed on the security situation and measures taken to ensure effective management of the Pakistan-Afghanistan border, the ISPR said.

“COAS said [to the troops] that terrorists would never be allowed to disturb the hard-earned peace in these areas. Pakistan Army and LEAs will do whatever it takes till the job is fully accomplished,” the ISPR quoted Gen Bajwa as saying.

There, he again paid tributes to the martyrs who had laid their lives in the line of duty. He also lauded the troops for their contribution in aid of civilian administration to control the pandemic and directed strict adherence to guidelines in this regard.