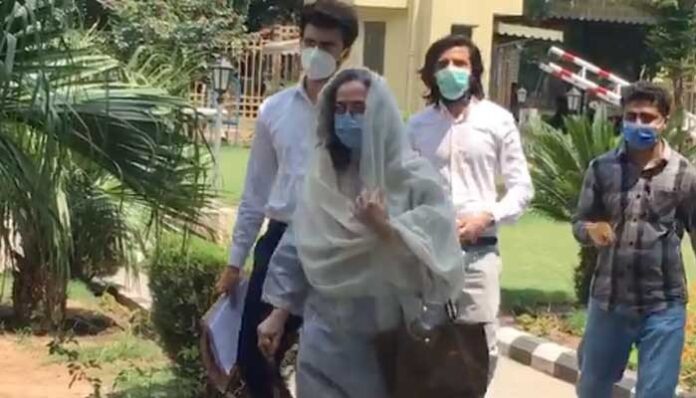 Sarina Isa, the wife of Supreme Court (SC) Judge Justice Qazi Faez Isa, has replied to the former attorney general of Pakistan’s allegations regarding her purported opening of a foreign currency account under a pseudonym.

Earlier, former AGP Anwar Mansoor Khan, during an interview broadcast on YouTube had alleged that the SC judge’s wife had opened a foreign currency account with another name.

Sarina furnished a two-page response wherein she questioned why and how the former AGP was able to access a confidential report of the Federal Board of Revenue (FBR) chairman.

Sarina, in her two-page response, asked how the former AGP got a copy of the confidential report of the FBR chairman.

“The chairman was not a party nor [he] filed his report in the court, so how did you get it,” she asked in the letter.

“Was the report prepared as [part of] a plan B,” she said and added that, “referencing the report confirms that you are part of yet another conspiracy, the roots of which your own disclosure has unveiled.”

The apex court on April 26 had quashed a probe into foreign assets believed to be in possession of Justice Isa and had accepted for hearing a set of review petitions filed by the judge against the verdict in the presidential reference against him.

“For the reasons to be recorded later […] review petitions are allowed [for proceedings] and the directions contained in [the] short order passed in [June last year] and other connected matters, along with supporting detailed reasons given in the majority judgment of the same date, are recalled and set-aside,” a short-order had read.

The petitions were filed last year against a short order and a subsequent detailed judgement on the filing of presidential reference against the judge that accused him of being in possession of assets in the United Kingdom.

On June 19, seven judges of the 10-member larger bench quashed the reference but ordered the FBR to conduct an inquiry into the assets and submit a report to the Supreme Judicial Council (SJC).

In the 6:4 majority decision last month, the bench had accepted the request made by Sarina Isa, the judge’s spouse. However, five judges accepted Justice Isa’s review petition while five were against it.

The bench had declared that legal actions taken by the top revenue collector and all other bodies into the assets in possession of Sarina and her children as “illegal”.

The report prepared by the FBR could not be challenged in the top judicial body or any other legal forum, the judgement had announced.