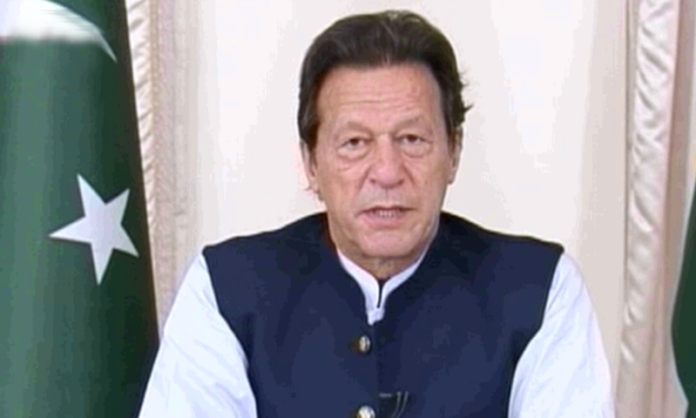 “To bring powerful accountable before law is a jihad. We will make corrupt political leaders and mafias surrender before rule of law,” the prime minister said in a live telephonic call session with the general public.

This was the third such interactive session titled ‘Aap ka Wazir-e-Azam, Aap ke Sath’, where the prime minister took live phone calls and responded to the questions of calls.

The prime minister, vowing to uphold the supremacy of law and justice to make Pakistan great, said that a nation could not become a strong nation unless it empowered its weaker sections, adding that this was the reason he had joined politics and named his political party Pakistan Tehreek-e-Insaf after justice.

He said that the government was firm to ensure socio-economic justice in the country and mentioned that “we are nearing our destination and I will fight these mafias and win”.

PM Imran said that a nation could not prosper whose leaders and prime ministers stole money as it resulted in the weakening of the country’s economy.

He mentioned that the FACTI panel of the United Nations that $1,000 billion was annually transmitted from poor to rich countries illegally.

The prime minister asked the public to report cases of illegal land grabbing directly to him and mentioned that the government had cleared 21,000 acres of land worth Rs 27 billion from such mafia.

He recalled that Pakistan Muslim League-Nawaz (PML-N) leader Maryam Nawaz sided with a land grabber when the government cleared the land from illegal occupation after proper tallying with proper land records.

He said that the land laws were reformed in Islamabad and Khyber Pukhtunkhwa (KP) to settle the litigation on land disputes within one year and assured to implement the same in Punjab as well.

The prime minister said that his government did not interfere with the working of the judiciary and National Accountability Bureau (NAB) as it wanted the rule of law in its true spirit.

On accountability of his party leader Jehangir Tareen, he dismissed the impression that any injustice or victimization was made. He pledged that those who were involved in the price hike of sugar would be punished.

He mentioned that an increase in one rupee price by the sugar mafia extorted Rs5 billion from the pockets of the masses.

“The sugar industrialists paid Rs22 billion as tax in five years but got Rs29 billion rupees in levy of subsidy. There will be no concession with any mafia,” he added.

“I am answerable before Almighty Allah. How can I put the poor in jails and set the powerful free?” he said.

PM Imran said that cartels and monopoly-like witnessed in the case of sugar mills resulted in inflation. The appointment of Shaukat Tareen as finance minister is in view of controlling inflation and increase the growth rate, he added.

On petroleum prices, he said the government had kept the price of commodity lowest compared with India, Indonesia, Sri Lanka, China, US Turkey, Malaysia, Bangladesh and Bhutan to cheapest oil, so as to avoid burden on consumers.

He mentioned that worldwide, the prices of commodities went up during pandemic including gas by 60 per cent, food 29 per cent, metal 41 per cent, crude oil 84 per cent, cotton 44 per cent, palm oil 54.8 per cent, soya bean oil 36.6 per cent and sugar 14.5 per cent. However, he said, according to a Bloomberg report on food inflation and agricultural sub-index, Pakistan still kept the prices low.

He said that the government through reforms reduced economic losses of public corporations from Rs286 billion to Rs143 billion, whereas the current account deficit remained in surplus for the last 10 months besides an increase in foreign exchange reserves touching $15.6 billion. He also acknowledged the financial assistance by Saudi Arabia and China in gaining economic stability in Pakistan.

“During the pandemic situation when the whole world is facing financial crunch, our government have saved the economy,” he said.

PM Imran said that now, the rupee had strengthened against the dollar at Rs 152, exports increased by 13.5 per cent, the Euro bond helped gain $2.5 billion and revenue of the Federal Board of Revenue (FBR) was increased by 11 per cent.

He that said the textile and cement industries witnessed a boom, while local car manufacturing was recorded at 18 per cent. The Karachi Stock Exchange showed a bullish trend by 66 per cent increase as per Bloomberg and the information technology exports increased by 44 per cent.

Premier Imran said that Pakistan had immense potential in the agriculture sector and the government would announce reforms every two weeks aimed at introducing advanced growing modes and by directly facilitating the farmers.

He mentioned that 65 per cent of farmers in the country owned land of fewer than five acres and the government aimed at benefitting them through incentives such as Kisan card and subsidy.

He said that the private sector would be involved in the technique learning of farmers and seed development.

In view of the increase in population, he said, the government has started thinking of a long-term food security plan and increase production of wheat and milk.

PM Imran said that an additional Rs 1,100 billion were given to farmers in lieu of direct subsidy on seeds and fertilizers which resulted in high production of sugarcane and corn by 22 and 27 per cent, respectively.

The prime minister said that incentives in housing sectors had encouraged economic activity and the banks were offering loans for the construction of houses. He acknowledged the role of courts in the passage of foreclosure law of banks which he said greatly helped in the materialization of the low-cost housing project.

Responding to a caller who complained about a delay in a housing project for government employees in Bhara Kahu, he advised his staff to note the matter for further pursuance.

PM Imran said that lack of planning and civic infrastructure had led to the improper expansion of metropolitans. He said that barrages were being to overcome water scarcity, adding that for Islamabad, a special arrangement of water supply was in progress.

On the issue of Kashmir, the prime minister categorically stated that Pakistan would not resume talks with India till its restores the special status of the Occupied Valley.

“Unless India reverts to its August 5 action, Pakistan will not hold talks,” he said.

PM Imran said that the Hindu supremacist ideology of the ruling Bharatiya Janta Party (BJP) in India was being condemned at the international level. He lauded the role of Pakistan’s Foreign Office in leading a full campaign to highlight the Kashmir issue.

The prime minister appealed to the nation to follow precautions to contain the spread of the third wave of coronavirus, particularly during the Eid holidays.

“I request you to follow standard operating procedures (SOPs) and particularly use face masks. Take care of your elderly so as to avoid lockdown,” he said.

To a question on reduction of timings in bazaars that led to more crowd, he said the schedule could be reviewed in consultation with National Command and Control Centre (NCOC).

He said that Pakistan was working on producing its own Covid-19 vaccine and said “good news was in this regard was in the offing”.

PM Imran announced the establishment of a dedicated portal for overseas Pakistanis to be headed by the foreign minister, where complaints could directly be made if an embassy or foreign mission did not respond.

He said that the portal would be advertised soon where a special officer would be working under the foreign minister as a focal person to deal with the complaints.

He mentioned that the Foreign Office (FO) was working well in the area of diplomacy, adding the focus of the government was two areas including consular services and attracting foreign investment. He, however, admitted that his recent interaction with the diplomats at missions abroad, where he had pointed out the shortcomings, should not have gone on air for public consumption.

The premier said that smuggling was a big problem at the borders with Iran and Afghanistan and mentioned that the smuggling of Iranian petrol, which was causing huge financial loss, was completely stopped at the border.

He said that the establishment of markets at both borders would encourage the traders to involve in economic activity and refrain from smuggling.