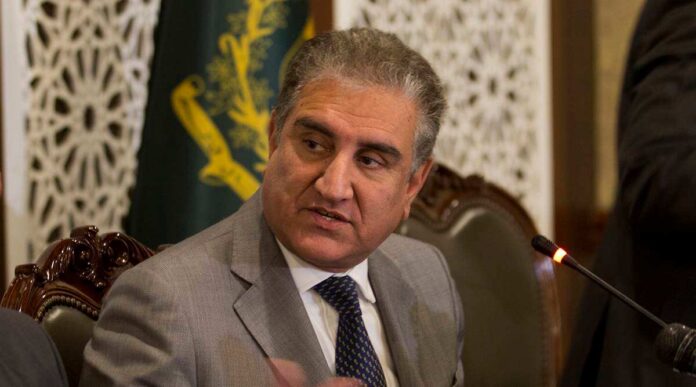 ISLAMABAD: Foreign Minister Shah Mahmood Qureshi Tuesday said Pakistan would welcome the third-party facilitation by Saudi Arabia or any other country for resumption of dialogue with India.

“Pakistan is ready for third-party facilitation. It is India that has always shied away from it,” he said in a press conference held at the Ministry of Foreign Affairs.

Qureshi observed Riyadh was a friend but also had business ties with New Delhi, a big importer of Saudi crude oil.

“If Saudi Arabia wants to play a role [in facilitating talks], we would welcome,” he said.

He recalled that the ceasefire agreement between Pakistan and India was welcomed by the world, including Saudi Arabia.

The foreign minister confirmed that there were “no formal talks” at the moment with India, however, said if India wanted it to resume it, it “must take the first step forward”.

“If India wants a meaningful dialogue with Pakistan, it has to review its policy on Kashmir and undo the revocation of their special status,” he said.

Qureshi called upon India to give relief to the people of Kashmir, who were suffering from a prolonged military siege and the so-called search and cordon operations, and thus “pave way for a conducive environment for talks”.

To a question regarding his recent statement on Article-370 of the Indian constitution, he said Pakistan was firm on its stance that “Kashmir is not an internal matter of India”.

“Pakistan has not taken any U-turn and will never do so. The dispute, which is at the agenda of United Nations Security Council with several resolutions on it, cannot be an internal matter of India,” he said.

“There is no ambiguity and Pakistan will continue highlighting the plight of Kashmiris at all international fora,” he added.

By revoking Article 35-A, he said, India was attempting to distort the demography of the region and denying the Kashmiris their identity.

On Prime Minister Imran Khan’s recent visit to Saudi Arabia, he said it led to the development of a “positive understanding” at both sides.

He said besides agreement on investments, bilateral trade, and creation of job opportunities, the significant development was putting in place for the first time an institutionalised mechanism with three pillars — security, economic and cultural, and soft image, and chalking out who would be leading the respective areas.

“This Saudi visit was different in the sense that it defeated the designs of the elements that were trying to create a wedge between Pakistan and Saudi Arabia. Now, it is win-win cooperation,” he said.

Qureshi said under the Vision 2030 of the crown prince, around 10 million workforce was required in the next few years and Riyadh wanted to allocate a big chuck for Pakistan nationals.

“In addition to blue-collar jobs, we have to prepare our workforce for the white-collar jobs through their capacity-building at professional sides,” he said.

He said the $500 million of Saudi money would help Pakistan meet its energy needs through the development of hydropower projects.

Qureshi said Saudi Arabia had a special place in the Muslim community which looked towards it for a leadership role, saying that Pakistan welcomed the initiation of talks between Riyadh and Tehran to ease tension.

Asked if the Saudi assistance to Pakistan would lead to favors in return, he said: “Pakistan is not paying a price. It prioritises its own interests.”

“Diplomacy is not an instant job, but one has to chip and work on the matters through persistent efforts. Pakistan will protect its interests in any case,” he added.

Qureshi said Pakistan stands with Afghanistan in its efforts for peace, prosperity, reconciliation and categorically stated that it did not side with any particular stakeholder.

“We will remain partners in peace with Afghanistan and will continue to play our role as a facilitator,” he said, a political solution through negotiations was in the interest of Afghanistan.

He welcomed the recent ceasefire between the Taliban and the Afghan government, saying that the positive development would enable a conducive environment for negotiations.

Qureshi dismissed that Pakistan would allow any military bases on its soil in the wake of the withdrawal of US troops from Afghanistan.

“We will not allow [American] boots on the ground or allow military bases,” he said.

He assured the Afghan government and people that Pakistan wanted a strong and stable Afghanistan and “will not interfere in their internal matters”.

On the situation in Palestine, the foreign minister strongly condemned the Israeli attacks on worshippers at Al-Aqsa Mosque and called upon the international community to mobilise efforts to diffuse the conflict.

Regarding the prime minister’s recent criticism on Pakistan missions abroad, he said the purpose was to bring improvement and avoid negligence aimed at facilitating the overseas Pakistanis.

However, he pointed that it was unnecessary to make public an in-house meeting as several officials working at the embassies were reporting to their respective ministries and not the Ministry of Foreign Affairs.

The foreign minister also vowed to “never let down the morale of diplomats”, adding that a task force headed by Foreign Secretary Sohail Mahmood has been established and input has been sought from the foreign missions.