Buzdar says Rs7.8bn to be spent on different uplift schemes 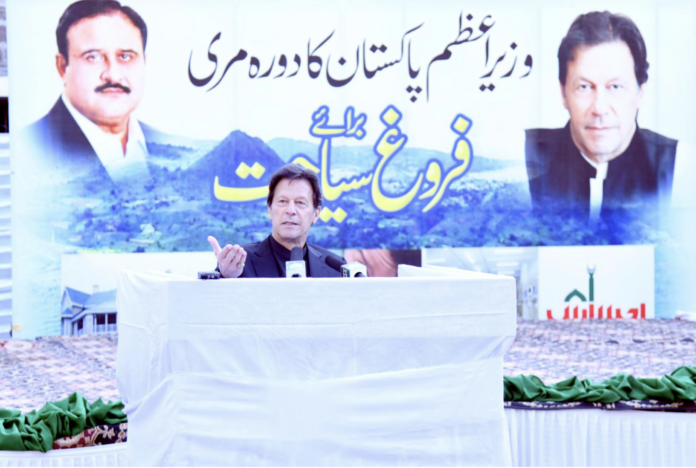 MURREE: Prime Minister Imran Khan on Friday launched various development projects in Murree, including establishment of Kohsar University and up-gradation of TB Sanatorium Hospital.
Addressing the launching ceremony, the prime minister said that the government is focusing on developing new tourist destinations to promote tourism and provide jobs to local people. He said that tourism is the future of Pakistan and Kohsar University will contribute a lot in this regard.
PM Imran said, “We can retire our debt by promoting tourism in all parts of the country.” He said that Switzerland earns around $80 billion every year through tourism. He also said that Switzerland has developed tourism as a science and launched courses in hospitality management and “we can also earn more by developing our northern areas and other tourist spots across Pakistan.” He added that the tourism sector has been flourishing in Pakistan with double pace every year.
The prime minister, on the occasion also planted a sapling under the Clean and Green campaign. He distributed cheques among the deserving people under Ehsas Programme as well as loans under Kamyab Jawan Programme.
“Several tourist spots could be established in KP and Gilgit Baltistan,” the prime minister pointed out while emphasising as to how the incumbent government has played its role in promoting tourism in the country. He lamented the previous leaders for neglecting tourism and utilising government’s resources. “A family in Murree spent Rs830 million from the national exchequer on their home,” he said.
The prime minister further lamented that Punjab House of Murree was previously used by ministers, who spent millions from national exchequer.
It is pertinent to mention that Punjab House of Murree has also been included in the Kohsar University to expand its premises and academic blocks while special disciplines of Hotel Management and promotion of tourism are being introduced in the university besides other faculties.
Speaking on the occasion, Punjab Chief Minister Sardar Usman Buzdar said that Murree enjoys the position of being the prime tourist spot in the country while Kahuta and Kotli Sattian also attracts sightseers because of their serene beauty.
The CM said that the PTI government is working to develop the best facilities for the visitors in Murree and adjoining areas. He said that Rs7.80 billion will be spent on different development schemes to provide better facilities as promotion of tourism is an important agenda of PTI government.
The foundation stone of Kohsar University and attached study centre has been laid where tourism and hotel career development management classes will be started, he announced. Along with it, the upgradation of boys and girls’ colleges of Kahuta, Kotli Sattian and Kalar Syedan has been laid and Municipal Committee Murree has been given the status of a municipal corporation, he added. The CM disclosed that additional deputy commissioner and SP are being posted to improve administrative affairs. New building by-laws are also being implemented and a ban on new constructions has been lifted, he stated.
The CM affirmed that the emergency of THQ hospital Kahuta will be upgraded along with the upgradation of Samli Sanatorium. A dialysis unit and trauma centre will also be established, he continued. A parking plaza is being constructed in Jhika Gali in public-private partnership mode to save visitors from parking difficulties. Meanwhile, he said that projects like tourist highways and provision and drainage of water will also be started to resolve such issues.