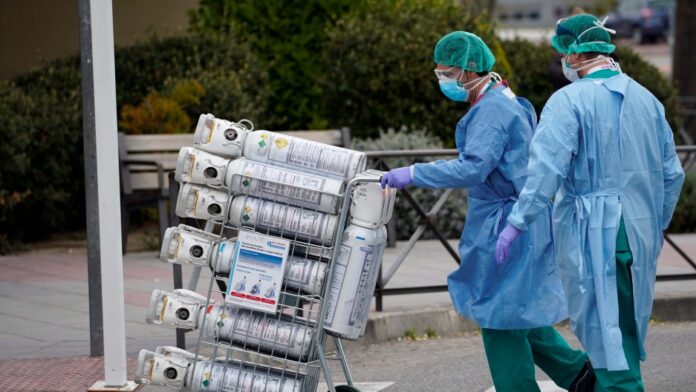 ISLAMABAD: As the average number of new coronavirus infections reported each day has risen by more than 1,000 over the last 3 weeks, or 18 percent of the previous peak, Minister for Planning and Development Asad Umar said nationwide oxygen supplies are now under stress.

His statement comes as the government portal registered 5,152 new infections of the coronavirus after conducting 60,162 tests, receiving back a transmission rate of 8.56 per cent.

“Hospital fill up continuing to grow. Critical care patients now above 4,500, which is 30 per cent higher than peak in June last year,” the minister said in a series of tweets.

Hospital fill up continuing to grow. Critical care patients now above 4500, which is 30% higher than peak in june last year. Oxygen supply capacity in the country is now under stress. Sop compliance remains low. We are making a huge mistake by not following sop’s

“Oxygen supply capacity in the country is now under stress,” he said, adding the compliance with the government-devised health guidelines remains low.

“We are making a huge mistake by not following SOPs,” Asad warned.

The number of people who have recovered from the contagion disease in Pakistan has reached 662,845 after 3,362 more recoveries were reported in the country during the last 24 hours. There are 82,276 active cases in the country while the recovery rate is 87.1 per cent, data released by the Ministry of National Health Services (MoNHS) showed.

Covid-19 is continuing to spread around the world, with almost 140 million confirmed cases and 3 million deaths across nearly 200 countries. The global daily caseload has increased to 750,000 infections and deaths to 13,000, the minister observed.

Global covid cases exceeding 750,000 per day and deaths more than 13,000. We are seeing some of the worst numbers since covid started. Our neighborhood in severe crises. Daily deaths in iran more than 300 and India more than 1600. Need for safety precautions greater than ever

Daily Covid-19 cases in India jumped a record 273,810 on Monday. Deaths rose a record 1,619 to 178,769. Hospitals in the country are struggling with a shortage of beds, oxygen, and key medicines as infections pass the 15 million mark, second only to the United States.

Fewer than 100 critical care beds were available in the city of New Delhi, with a population of more than 20 million people, Chief Minister Arvind Kejriwal said on Sunday, as social media was flooded with complaints.

The government launched the nationwide Covid-19 vaccination for the general public, starting with older people, in March. The drive began with a focus on the oldest people in the community, generally over the age of 80.

Minister of State for Health Dr Faisal Sultan announced that by the end of June, the government would have a stock of 17 million coronavirus vaccine jabs but stopped short of identifying the producer.

“The challenge [for the government] is to deploy and use them. The number of people who have registered is in the hundreds of thousands, not millions, yet we need to vaccinate 40 to 50 million by the end of this year,” he said in an interview.

When asked, the minister rejected the criticism that Pakistan has not been as proactive in obtaining the shots compared to its regional neighbours.

“Until about a week ago, there were about 65 countries where vaccination rollouts had begun and 130 have yet to begin. Pakistan began its programme 24 days ago. So, we cannot say we began late […],” he said.

Dr Faisal expressed apprehension that there may be a third wave of the disease in winter. “However, with enough vaccinations combined with the number of people who have already caught [the disease], it may provide a community level of immunity,” he said.

“However, the variants are a threat. In my opinion, we may have seen the worst of it, but the coming winter will tell the real story.”