No change in policy on Jammu and Kashmir, says US State Dept 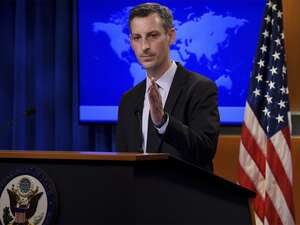 The United States has said that there is no change in its policy on Jammu and Kashmir and that it still considers the region as a disputed territory between Pakistan and India.

“I want to be very clear there has been no change in US policy in the region,” State Department Spokesperson Ned Price told reporters, clarifying the views expressed in a tweet from the South and Central Asia Bureau of the State Department which welcomed the resumption of 4G mobile internet in Jammu and Kashmir.

“We welcome the resumption of 4G mobile internet in India’s Jammu and Kashmir. This marks an important step for local residents and we look forward to continued political & economic progress to restore normalcy in J&K,” tweeted the South and Central Asia Bureau of the State Department.

Earlier this week, India ended an 18-month-long ban on high-speed internet services in occupied Kashmir, where opposition to the Indian rule has deepened after New Delhi revoked the region’s semi-autonomous status in August 2019.

According to a 2019 Congressional Research Service report of August 2019, a longstanding goal of US policy in South Asia has been to prevent India-Pakistan conflict from escalating to inter-state war. This meant the United States has sought to avoid actions that overtly favoured either party. Over the past decade, however, Washington has grown closer to India while relations with Pakistan continue to be viewed as clouded by mistrust, CRS report said.

Meanwhile, Pakistan on Thursday expressed “disappointment” over a tweet by the United States State Department for making a reference regarding Jammu and Kashmir “inconsistent” with its disputed status.

The Bureau of South and Central Asian Affairs, US State Department in its tweet on February 10 had mentioned the reference as “India’s Jammu & Kashmir” while welcoming the resumption of 4G services.

“We are disappointed to note the reference to Jammu and Kashmir in the US Department of State’s tweet regarding the resumption of 4G mobile internet in Indian Illegally Occupied Jammu and Kashmir (IIOJK),” the Foreign Office Spokesperson said in response to media queries.

The spokesperson said the reference was “inconsistent” with the disputed status of Jammu and Kashmir as recognized by numerous United Nations Security Council (UNSC) resolutions and the international community.

“Jammu and Kashmir is one of the oldest items on the agenda of the UNSC, which remains unresolved because of India’s intransigence and unwillingness to implement the relevant UNSC resolutions and its own solemn commitments made to Pakistan, the Kashmiris and the international community,” he added.

The spokesperson said the political and economic progress of the people of Jammu and Kashmir was inextricably linked to the realization of their desire for exercising the right to self-determination.

He said that the international community, including the United States, must urge India to stop its consistent and systematic human rights violations in IIOJK.

The FO spokesperson called the need for genuine steps to resolve the dispute in a peaceful manner in accordance with the relevant UNSC resolutions.