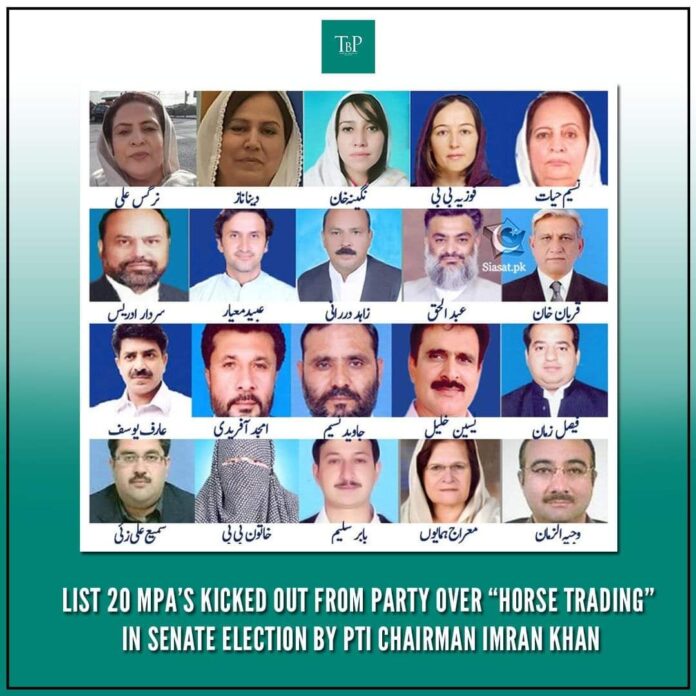 ISLAMABAD: In a shocking development, a 2 minutes and 11 seconds-long video has surfaced featuring six former lawmakers of the Khyber Pakhtunkhwa (KP) Assembly who served from 2013 to 2018, including the incumbent Law Minister Sultan Mohammad Khan, allegedly receiving money in exchange for votes in the 2018 Senate elections.

The video reveals how the loyalty of around 20 lawmakers of the ruling Pakistan Tehreek-e-Insaf (PTI) had been changed while the majority of lawmakers of Qaumi Watan Party (QWP) had also allegedly sold their votes due to horse-trading during the Senate elections in 2018.

While Imran Khan had removed 20 party lawmakers from the party after holding a thorough investigation, no other party had taken action against their lawmakers.

Sources have told Pakistan Today that the vote-trading had been carried out from February 20 to March 2, 2018.

The video shows six members of the PTI government allegedly receiving money and putting them in bags. The money is being obtained by Obaidullah Ma’ayar, the then PTI member from Mardan, PTI MP Deena Naz from Karak and Sardar Idrees, an independent member elected from Abbottabad who later had joined PTI. The video also featured Mairaj Humayon of QWP receiving the money.

Sultan Mohammad Khan, incumbent provincial law minister, is also seen with bundles of notes lying on the table in front of him. Sultan was then lawmaker of QWP, who later in 2018 had joined PTI and was again elected.

The other five members including Obaidullah Ma’ayar, Mohammad Ali Shah Bacha and Sardar Idrees, lost the 2018 elections, while Deena Naz who joined the PPP and Mairaj Humayun, who joined the PTI, failed to get elected.

Talking to journalists, Law Minister Sultan Mohammad presented an ostensibly incredulous excuse, suggesting that the video did not feature him and rather it was his look-alike in the video. Soon afterwards, the resignation of the law minister emerged where other PTI leaders confirmed that the law minister had been sent packing.

“Due to a video that is being circulated on the media today, in which my name has also cropped up and being mentioned, I feel it my moral duty and obligation to withdraw from the [provincial] cabinet and offer my resignation,” the minister wrote in a letter shared on social media. 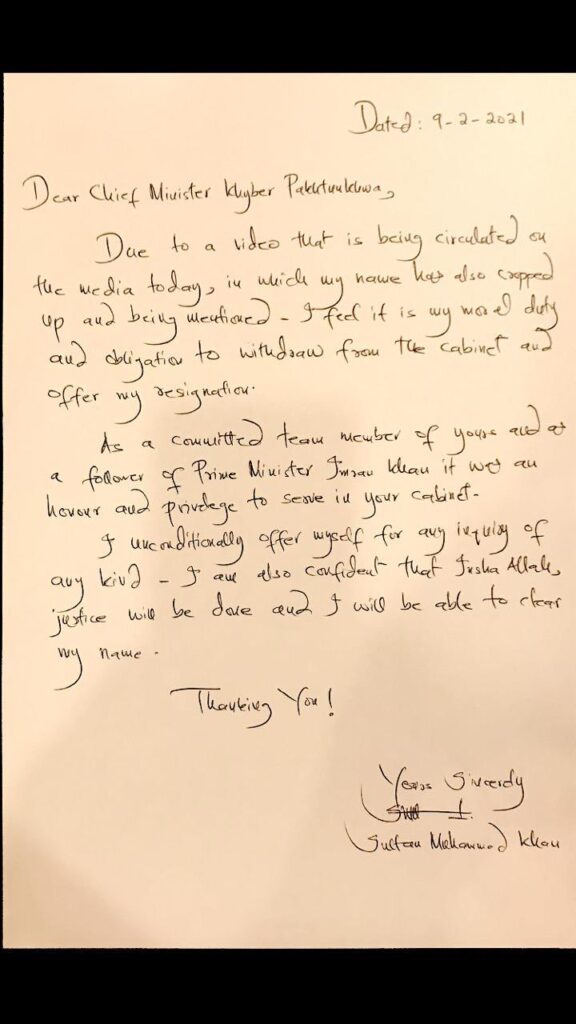 “As a committed team member of yours and a follower of Prime Minister Imran Khan, it (would be) an honour and privilege to serve in your cabinet,” reads the resignation – a copy of which is available with Pakistan Today.

Deena Naz, Mairaj Humayun, Sardar Idris and Mohammad Ali Shah Baacha did not respond despite successive calls made on their phones.

Reacting to the videos, PM Imran Khan expressed on Twitter: “The videos showing the shameful way in which politicians buy & sell votes in Senate reflects the total destruction of the nation’s morality by successive ruling elites as they drowned the nation in debt. Cycle of corruption & money laundering is a sordid tale of our pol elite.”

“They [the ruling elites] spend money to come to power & then use this pol power to make money to purchase bureaucrats, media & other decision-makers to consolidate their power & rob nation’s wealth – money laundering it into offshore accts/ foreign assets/palatial residences abroad,” he tweeted.

“This is what the PDM cabal wants to now protect by supporting a corruption-friendly system. We are determined to stop this cycle of corruption & money laundering that is debilitating the nation,” the premier added.

In the 2018 Senate elections, the PTI only won seven seats in the KP assembly despite having a clear majority in the house.

Moreover, it was necessary for any candidate of Senate elected to a general seat to get over 15 votes from the assembly. The PPP, with only four members of KP Assembly, had obtained two Senate seats.

Behramand Tangi had won the general seat with 16 votes while Rubina Khalid won the women’s seat by securing 47 votes. At the time, the PPP was accused of buying votes.

QWP at the time had nine members in the house but its nominee for Senate could not get a single vote in the Senate election.

Mohammad Ali, the then lawmaker of Jamaat-e-Islami (JI), had later told media that he was offered Rs90 million at the hotel near KP assembly in exchange for his solitary vote, but he had refused to sell his vote, putting his party’s interest first.

Soon after the Senate elections, PTI Chairman Imran Khan had said at a press conference on April 18, 2018, that 20 lawmakers of his party who found involved in selling their votes.

The then PTI chairman had alleged at the time that each member who sold his vote had allegedly received Rs40 million each.

Mian Abrar
The writer heads Pakistan Today's Islamabad Bureau. He has a special focus on counter-terrorism and inter-state relations in Asia, Asia Pacific and South East Asia regions. He can be reached at hussainmi[email protected]