The Emperor has no clothes

The Confederacy lives on in spirit 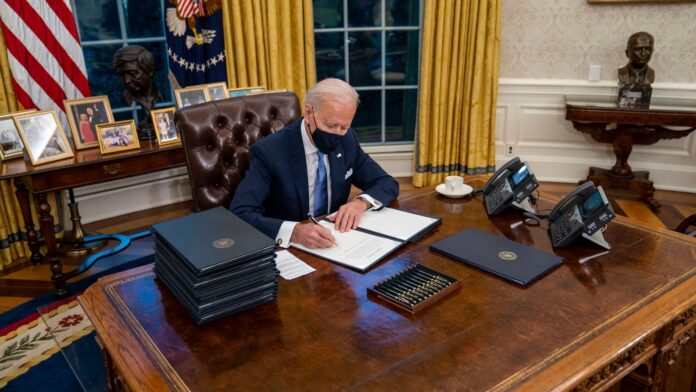 US President Joe Biden has taken office at a time when his predecessor has been impeached, for the second time, this time for having incited the crowd which took over the Capitol, breaking in to the joint session which was about to certify the electoral college result in favour of Joe Biden. It is not that Pakistan is entirely unfamiliar with the situation, though it does different things in response. When the PTI dharna exploded into a takeover of Parliament building, however, it was not considered an attempt to sabotage democracy, nor was PTI leader especially singled out for punishment.

On the other hand, Trump has been accused of attempting to subvert democracy, of trying to carry out a coup, and has been impeached. The impeachment is interesting, in that there is a punishment provided, being the US Equivalent of Article 6 of the Pakistani Constitution. Overall, also reflected was the fact that the coup attempt did not involve the military. Trump had hoped that the military would help him as Commander-in-Chief, but the Chairman of the Joint Chiefs of Staff Committee, had already been firm about not obeying. Clearly, the military did not feel that it could not work with President Biden.

This represents the first time that there has been a dispute of the election results being carried to the extent of their being challenged so strongly by the mob that it attempted to up-end the certification process, normally a formality. Only in 1876 was there a dispute about the electoral votes from Florida, and the extraordinary procedure of a congressional commission used. However, Trump had lost both the popular vote and the electoral vote. By attempting a violent coup, he was providing yet another reminder of how fragile democracy was, and prompting speculation about the last time democratic government was up-ended.

Going by the example of Rome, it is early days yet. First of all, the USA has survived worse. The Civil War, well over a century and a half ago, was something the USA survived. That too started with a tense election, with the victory of the abolitionist Abraham Lincoln making the secession of the South inevitable. There is no such clear geographical division now, but the problem of race remains. The Civil War is not over, as some of those who stormed the Capitol carried Confederate flags. Last year, that flag, and other Confederate symbols, such as the statues of its war heroes, were at the centre of controversy during the Black Lives Matter movement, with opponents saying they honoured slavery supporters, and defenders saying they reflected history. The reason the Civil War is not over is dual. First, the North itself was strangely ambivalent about race. Second, the USA is still racially troubled, as reflected in the strength of the white supremacist movement. It is apposite that the last time US soldiers had to sleep in the Capitol, as they have had to this tie, was in 861, faced with the threat of Confederate invasion.

The USA has not yet exorcised its demons. Trump supporters do not want just a turn at power, with quadrennial refreshments of a mandate to rule. They want permanent power. The founders of the USA admired the Roman Republic, but did not see, as now can be seen, that if their Republic, like the Roman, acquired an Empire, it would turn into an empire. The storming of the Capitol should be seen as the first step in the search for an Emperor.

However, because the USA could come through the Civil War, scarred but intact, it is being assumed that it will come through this crisis too. It is thus instructive to look back to the fall of the Roman Republic, and how it began with the killing of Tiberius Gracchus in 133 BC, when as tribune he promulgated a land reform law. Opponents rioted. Several rioted. He was among those killed. In the same way, his brother Gaius committed suicide after a day chased by a mob through Rome, in 122 BC. The later rise of Gaius Marius, then of the military dictator Sulla, of Julius Caesar, and finally of Augustus, appear as stages in the shift to Empire and the demise of democracy.

One of the features visible then was the division of Rome between the two parties, the Optimates and the Populares, just as the USA is now riven between Republicans and Democrats. Rioting near the Capitol was a mark of the Gracchi’s murders, and the US Capitol has been named in deliberate tribute to the Roman Republic. The USA, which was founded by admirers of the Roman Republic, was a sort of laboratory for the Enlightenment.

When applied to Europe, that Enlightenment led to the overthrow of the French monarchy and the rise of Napoleon. It also led to the development of socialism and later communism. It is an integral element in the cultural make-up of the West. Does Trump represent those who reject the Enlightenment? Certainly, is rejection of science, of expertise, seen in his denial of climate change and then of the covid-19 pandemic, now this.

Has the election of Joe Biden meant the end of the Trumpian rejection of the Enlightenment? Not necessarily, though he has been elected in what seems an attempt to right the ship. He has agreed to the Liberal agenda, which is what the Enlightenment wished to promote. Trump has been accused of founding Trumpism, but it does not mean that he invented it, only that he pulled together various strands together of various conservative elements.  He lost by 3 million votes, but he did get more than 80 million votes. Those voters are not going to fade away anytime soon.

One of the consequences of impeachment is that he would be disqualified from contesting the Presidency, something for which he is eligible in 2024, with it being predicted that he will seek the Republican nomination. He will seek to become the only man apart from Grover Cleveland in 1896, to win a nonconsecutive term to the White House. Much of Trump’s importance is not so much because of is his own candidacy as because of his seal of approval for other candidates, who start amounting to thousands if state offices are included. Disqualifying him would mean that he will have to nominate a successor in 2024, just as he expected to. He might want to pass the torch on to his daughter Ivanka, but there are increasing signs that she might find that difficult to do. Who then?

That the USA went through a coup attempt is clear, but it was both amateurish and half-hearted. The nearest example is the 1923 Beer Hall Putsch by Hitler and Ludendorff in Munich. That failed, and there seems to have been a reversal this time, for while the Putsch convinced Hitler that legitimate means were preferable, the storming of the Capitol indicated that Trump felt that elections would not get him where he wanted to go. Significantly, Hitler did not control the German military in 1923, even though he had roped in the distinguished World War I veteran Gen Erich von Ludendorff. Trump has not been able to bend the military to his ill in his term in office.

Let there be no mistake. The USA’s institutions might have been strong enough to withstand this blow, but it has not yet exorcised its demons. Trump supporters do not want just a turn at power, with quadrennial refreshments of a mandate to rule. They want permanent power. The founders of the USA admired the Roman Republic, but did not see, as now can be seen, that if their Republic, like the Roman, acquired an Empire, it would turn into an empire. The storming of the Capitol should be seen as the first step in the search for an Emperor.