Peaceful rise of China and threat to the US 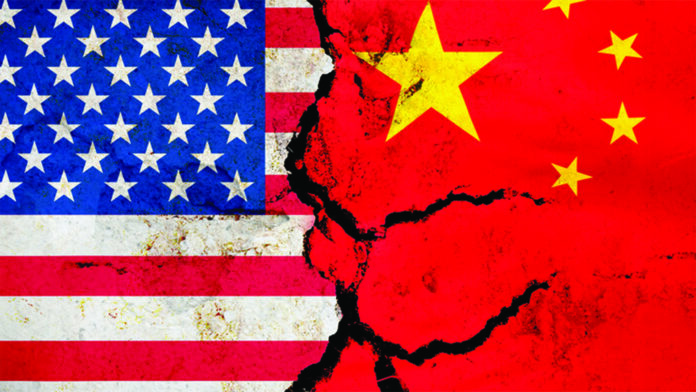 Since the birth of America, the Asian region has been considered one of the most important areas for economy and trade. History, geography, and demography also make the US an integral part of the region. Geographically, the states of Alaska, California, Oregon and Washington border on the Pacific Ocean and Hawaii is surrounded by it. In 1784, the US merchant ship (the Empress of China) which inaugurated America’s participation in the lucrative China trade in 1784. As Asia pacific region has its own significance so the US always puts an eye on this region. The US has a variety of interests at stake in the Asia Pacific region, with pressing diplomatic, national security and economic considerations, all against the backdrop of increased geopolitical volatility.

The first major policy was formulated at the end of 19th century, by US Secretary of State John Hay’s which was named as Open Door policy toward China. The Open Door Policy was a clever move on the part of the United States to create trade opportunities between the US and China while additionally asserting American interests in the Far East. In the short term, the Open Door Policy allowed the US to expand its markets for industrialized goods. It called for equal foreign commercial access to china. The reason being that at the time only certain states were getting privileges and getting their hands on all the commercial products of china. The US also worked to prevent the rise of a regional hegemon in Asia, whether it was imperial Japan or the Soviet Union. The US believes that they are long been a Pacific power, whose interests are inextricably linked with Asia’s economic, security, and political order.

Later on, when Obama took office, he introduces new policy pivot to the Asia Pacific. The policy was shifted from the Middle East to East Asia. Obama called himself “America’s first Pacific president.” He promised the nations of Asia a new era of engagement based on mutual interests and mutual respect. Obama also clarified US policy that the goal is not to counter or contain China. Its goal is to make sure international rules and norms are respected and that includes in the area of international disputes. The key areas of policy are “strengthening bilateral security alliances; deepening our working relationships with emerging powers, including with China; engaging with regional multilateral institutions; expanding trade and investment; forging a broad-based military presence; and advancing democracy and human rights.” Former Secretary of state Hilary Clinton’s termed the Asia Pacific as a key driver of global politics.”

There are two schools of thought, liberals who believe that the rise of China will not change the existing world order. On the other hand, the realists argue that China may challenge the US leadership and to overhaul the existing world order. Meanwhile Chinese believes that the existing world order is in favour of the US and its allies at the expense of Beijing. However, the US has a hidden agenda to exploit human rights and democracy to prevent China from rising to the “rightful place”, as the US always raises this sort of slogan to interfere in other state matters. Chinese also thinks that US-made contribution in resolving global issues but now this old vehicle has become tired and it needs reforms.

Meanwhile, if we see China it is prospering in the term of both economical and militarily. China is also developing its region such as One Belt One Road project which will bind together 65 countries (4.4 billion people) another big threat for the US. The US suspects that China may adopt its own “Monroe Doctrine” to enhance its sphere of influence and de-Americanize the region. This doctrine was very useful during the 19th century.

The US policymakers always highlight their fear regarding the rise of China. Former US Secretary of State Henry Kissinger said that “Once China becomes strong enough to stand alone, it might discard us. A little later it might even turn against the US if its perception of its interests requires it.”

On the other side, the US is also playing its game in the Asia-Pacific region. Trade in this region is stood at 3.2 trillion dollars in 2018 which includes Exports 1.4 trillion-dollar and Imports 1.8 trillion dollars. So economically this region play important role in the global market as well as the US economy. America’s top trading partners also present in this region such as China itself, Japan, South Korea, Taiwan, India, and Vietnam. So the USA also want peace in this region but wants to increase its influence. Washington has been also advocating an Asia-Pacific security structure with the US as the sole leader and with U.S.-led bilateral alliances as the backbone.

The US also faces a lot of challenges in this region such as North Korea and China which are an economic and security threat for the US. Longstanding strategic challenges in such regions as the Taiwan Strait, the Korean peninsula and the India-Pakistan border is seen as relatively quiescent but far from final resolutions.

For the implementation of their policy, the US had signed different agreements and treaties with their aliens. The United States benefited from its alliance arrangements during the Cold War era and wishes to preserve these assets in the post-Cold War world. China, on the other hand, does not have good memories of its alliance.

In Asia Pacific, the majority of the states are the aliens of the USA and also fear the uprising of China as an emerging power. This also helps the USA for the implementation of its policies. Due to this threat, the majority of states has done several agreements with the US such as modernizing security partnerships with allies: Japan, South Korea, the Philippines, Thailand, and Australia; as well as broadening engagement with emerging partners and power centres such as Indonesia, Vietnam, Singapore, Malaysia, Brunei, New Zealand, the Pacific Islands, and India; maintaining a positive and constructive relationship with China; and investing in the region’s multilateral institutions, including the Association of South-East Asian Nations, East Asia Summit, Asia Pacific Economic Cooperation, and the Trans-Pacific Partnership. The USA also signed several militaries to the military, Bilateral and Cooperation, Maritime Defense and Ballistic Missile Defense Cooperation agreement.

During the era of Trump, the US policies were diverted from the Asia Pacific such as president withdrawal from Regional Comprehensive Economic Partnership which was an agreement regarding the Trade tariffs and will benefit the USA. China is focusing on the policy of Neo-colonialism, which emphasises on economics, globalisation, cultural imperialism, and conditional aid to influence a country instead of the previous colonial methods of direct military control. China is developing its region as this also shows that China is rising peacefully and it will be a big threat for the US.

Raja Furqan Ahmad
The writer is a student of International Relations and Freelance journalist currently based in Islamabad, Pakistan. He can be reached at [email protected] or @furqanraja1122 on Twitter

The third wave of Covid-19 has arrived in the country Pakistan, because of the careless attitude of the people. The number of cases has...
Read more
- Advertisment -