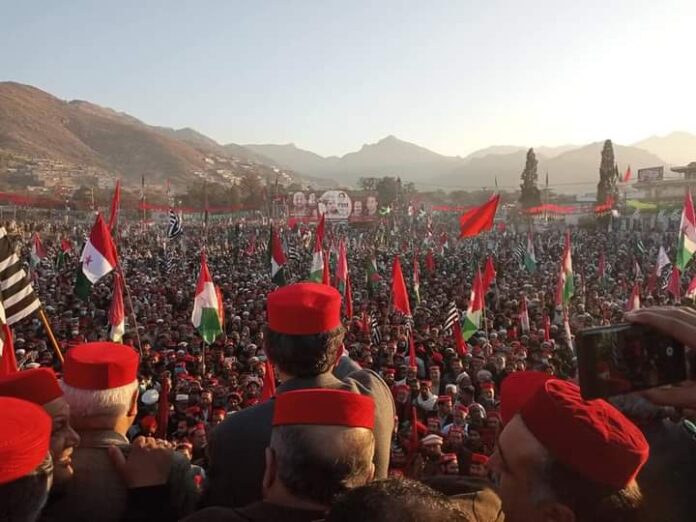 “Each citizen of Malakand has only one demand and that is for the ‘selected’ to go. These ‘tabdeeli’ peddlers are frauds,” the PPP chairman said, declaring that the Pakistan Tehreek-e-Insaf (PTI) led government was “incompetent and corrupt”.

They want to steal the Constitution but as long as the people of Malakand are standing with us, we will not allow them to do so,” he told the crowd, adding that the the PDM would not allow the ruling party to purportedly steal the rights and the National Finance Commission (NFC) Award of the region.

The PPP leader claimed that the Centre had withheld Rs160 billion which was due to be paid to Khyber Pakhtunkhwa (KP) last year while highlighting the problems the country’s middle-class and poor segments were facing.

“This is Naya Pakistan”.

“Even Afghanistan and Bangladesh are growing at a more rapid rate than Pakistan,” he claimed.

He added that the PPP had envisioned the China-Pakistan Economic Corridor (CPEC) passing through KP, but this was not made possible due to the inefficient incumbent government.

He said the people of KP would not bow before terrorists or dictators. Lambasting Prime Minister Imran Khan, Bilawal claimed that while the students of Army Public School where being “slaughtered”, Imran Khan was “dancing”.

“The murderer of our children, [former Tehreek-e-Taliban Pakistan spokesman] Ehsanullah Ehsan, has been released by this government of Imran Khan; we have not been able to provide justice to the parents of APS children in this government. We cannot show our faces to them [to tell them that] the murderer of your children was in our grasp and this cowardly government of Imran Khan allowed him to escape,” he said.

Moving on the the recent Mach tragedy, he asked how could the premier call the victims “blackmailers”.

“What kind of justice is this? Instead of going to the victims, the prime minister called them to him,” he said.

Bilawal said that PM Imran has proved that “blood is cheaper in Naya Pakistan than life”, adding that they will provide justice to people.

“The people of Malakand have been tolerating this inefficient, illegitimate government for the past seven years. […] Whatever they promised turned out to be lies and betrayals,” he said. He added that the PPP had introduced the 18th Amendment to get provinces recognition and their rights.

All promises he and his party had made to the people were fulfilled, he said, adding that his grandfather, former prime minister Zulfikar Ali Bhutto, had promised to abolish the Frontier Crimes Regulation (FCR) system and made good on it.

PDM President and Jamiat Ulema-e-Islam-Fazl (JUI-F) chief Fazlur Rehman also addressed the supporters of the opposition alliance, and said: “this sea of people would remove this government from power”.

“Our struggle is against those who snatched the mandate of the people,” he said, declaring that the PTI was determined to tamper with the rights given to the people through the Constitution.

The PDM chief taunted the National Accountability Bureau (NAB) to come and arrest him and asked why the anti-graft watchdog could not see the corruption of the ruling party.

Retorting to the statements of Inter-Service Public Relations (ISPR) Director General Major General Babar Iftikhar, Fazl said: “Those who are offering us chai-pani should eat pizzas themselves.”

Fazl declared that the PDM would continue and that the entire nation would march towards Islamabad and Rawalpindi. “The military leadership has to explain whether it is a party and if it is a party, then our protest is justified,” he added.

The PDM chief said that there is no democracy in Pakistan today and “a martial law was in place similar to that of General Zia and General Musharraf”.

“Will bring true democracy in the country with the help of the nation against this ‘dictatorship’”.

He further alleged that the current rulers were funded by external elements.

“This incompetent [man] has made Pakistan extremely indebted to other countries and international organisations,” he said. He declared that PM Imran was a “synonym of lies and hypocrisy” who could only blame others for his own mistakes.

“At least show the accountability of the foreign-funding case,” Muqam demanded, adding that “inflation” had plunged the country into “darkness”.

“The one who lies the most in this government is promoted and rewarded,” he said, while criticising the premier for the breakdown in the power grid on Saturday.

Muqam said that Pakistan’s youth have pinned their hopes of a better future on PML-N VP Maryam and PPP Chairman Bilawal.

Bilawal had been the first of the opposition leaders to reach the venue, and is accompanied by former prime ministers Yousuf Raza Gilani and Raja Pervez Ashraf.

Calling people to join the rally on Twitter, Bilawal said that opposition parties’ campaign is against inflation, corruption and injustices of “incompetent, illegitimate and puppet” rule of PTI.

On our way to Malakand for #PDMRallyMalakand. Join us to march against inflation, corruption and injustices of 7 years of incompetent, illegitimate and puppet rule of PTI . which has pushed KP & now all of Pakistan into crisis.

During the last rally in Bannu, PDM President Fazl had said that the march would either be towards the federal capital or to the army headquarters. He had also announced a sit-in outside the Election Commission of Pakistan (ECP).

ISLAMABAD: Foreign Minister Shah Mahmood Qureshi on Tuesday warned the international community against the damaging role of "spoilers" within and outside Afghanistan trying to...
Read more
- Advertisment -

January 19, 2021
LAHORE: Punjab Minister for School Education Murad Raas on Tuesday said that although coronavirus pandemic has affected studies of students, yet no one will be...