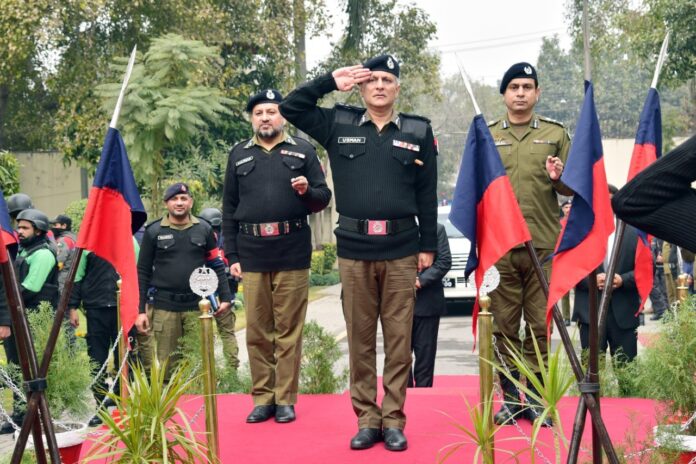 On arrival at IGP Office in Central Police Office, Dr Usman Anwar, a smartly turned out police contingent presented salutations to him. Senior officers of Punjab Police welcomed the new IG Police on the occasion.

After the salutation ceremony, IG Police Dr Usman Anwar met Additional IGs and DIGs in his office, after which, while answering the questions of the media representatives, he said that Transfer/Posting is the subject of federal and provincial governments and duty of officer is to perform his duties as per law and constitution.

While sharing his priorities with media personnel, Dr Usman Anwar said that conduct of free, fair, transparent and impartial elections in the province was his first and foremost priority. In this regard, performance of duties as per devised instructions and laws formulated by the Election Commission will be ensured at all costs. He said that steps will be taken under proactive policy to keep the province safe from the wave of terrorism and process of eliminating terrorists as well as their facilitators and miscreants will be accelerated.

Dr Usman Anwar said that protection of life and property of citizens along with elimination of crime was the main component of his policy. Likewise, he said that along with free registration of crime, police response will be improved for promoting sense of security among masses.

He stressed that any delay in registration of cases in cases of dacoity, robbery and theft would not be tolerated and priority measures would continue to provide justice and all possible relief to the victims of such crimes.

Dr Usman Anwar said that combing and intelligence-based operations will be expedited in vicinity of schools, colleges and hostels and dens of professional criminals would be eliminated to stamp out menace of drugs from society. The IGP said that the process of issuance of traffic license should be made easier for citizens and the number of learning offices as well as testing centers will be increased and traffic rules will be strictly enforced to prevent accidents. He said that hundreds of brave sons of police force have sacrificed their lives to maintain peace and order in society, and all available resources will be used to resolve problems of their families. He said that the legislative process will be completed for the recruitment of their family members in the police force on the Shaheed quota.

The IGP said that doors of his office will remain open for the citizens as well as the force and the open door policy will be promoted for direct communication with the citizens from the IG office to the police station level. He said that women officers and officials are the most important part of force and they will be given priority postings in commanding positions in police force. The IGP said that coordination with FIA will be improved to prevent crime related to telephonic fraud and cybercrime so that the process of punishing those involved in financial irregularities and harassment of women can be accelerated and accused could be punished. He said that use of information technology will be enhanced to deal with the modern day challenges and timely measures will be taken to resolve the social problems highlighted by the media. IG Punjab made it clear that good policies and initiatives taken by previous IGPs will remain continued.