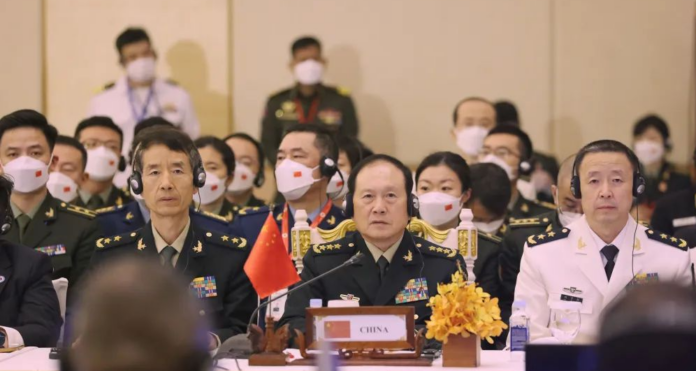 China’s peaceful development will surely provide new opportunities for common development of the world and play a constructive role in maintaining world peace and stability, he said, adding that the Chinese military is willing to work with the militaries of other countries to continue contributing to world peace.

He stressed that the Chinese armed forces have the confidence and capability to defend the country’s interests.

Talking about the security situation in the Asia-Pacific region, the Chinese defense minister said that defense departments of all countries should uphold ASEAN centrality, implement Global Security Initiative (GSI), focus on practical cooperation, and work together to build a security barrier in the region.

The GSI was proposed by Chinese President Xi Jinping during the Boao Forum for Asia Annual Conference 2022. The initiative embodies a security concept highlighting “commonality, comprehensiveness, cooperation and sustainability.”

Wei also mentioned the 20th National Congress of the Communist Party of China which concluded last month, saying that the Congress drew a blueprint for comprehensively building China into a great modern socialist country.

At a time when world peace and development are facing major challenges, building a community with a shared future for mankind is “the right choice and where the world’s future lies”, he said, calling for joint efforts in building and maintaining a regional order that accommodates the needs of all parties and serves their interests.

The meeting discussed and adopted a joint declaration on strengthening solidarity and cooperation.

During the meeting, Wei also met with defense ministers of the United States, Vietnam, Laos, Australia, New Zealand and the Republic of Korea and deputy defense minister of Russia, exchanging views on strengthening military-to-military cooperation and issues of common concern.