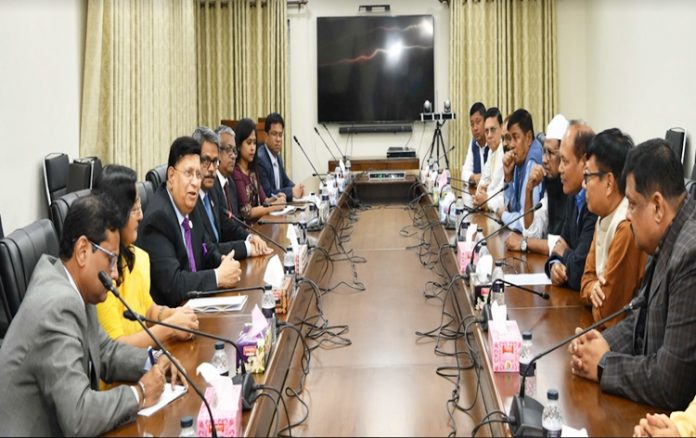 Mentioning that the commercial relations between the two countries will be strengthened through the visit, the Speaker said that earlier people’s livelihood in Assam was agriculture. Now business was the key. Youngsters thought about business after completing their studies. The youth of Assam would get commercial benefits of this visit.

The delegation will pay a visit to the tomb of Bangabandhu Sheikh Mujibur Rahman in Tungipara, Gopalganj, then meet with Foreign Minister AK Abdul Momen and take part in a dinner hosted by the minister. They will go to the Pran Industrial Park before traveling to Assam that same day through Akhaura.

The Speaker of the Legislative Assembly of Assam organized this informative visit. It is a study tour, he claims. They are curious about Bangladesh’s development, according to media reports.

In order to further boost connectivity and trade with the Seven Sister States and with India as a whole, Prime Minister Sheikh Hasina invited the seven chief ministers of India’s northeast to visit Bangladesh during her visit to Delhi in September.

This visit may be a part of a larger initiative to increase connectivity and trade with northeast India. The Indian government has been improving the northeast’s communication infrastructure as part of its Look East programme.

Recently, Indian politicians have praised Bangladesh for helping to maintain peace and security in the region by enforcing a zero-tolerance policy against militants. India also connects the ASEAN nations, including Myanmar, Thailand, Cambodia, and Vietnam, through the Seven Sisters.

The policy makers of the two countries are of the opinion that most of the Bangladesh-India border is connected with the state of West Bengal. In terms of commercial activities, the people of Bangladesh have a special attraction with this Bengali-speaking region of India. Similarly, if bilateral relations and trade between Bangladesh and Northeast India improve, the picture of the entire region will change.

Bangladesh has many potential ways to increase commerce with northeastern India and subsequently open up access to the ASEAN nations because both India and Bangladesh have made progress in establishing connectivity through roads and railways.

Bangladesh also permits India to transfer commodities between different parts of India by using the Chattogram and Mongla ports, which lowers the cost and speed of shipping.

The Speaker of the Assam Legislative Assembly Biswajit Daimari paid a courtesy call on the Prime Minister at Ganabhaban on Sunday. Prime Minister Sheikh Hasina said that the import of fuel oil from India will start through the pipeline next year. She said Bangladesh wanted to import oil through the pipeline. Hopefully this process can be started next year. The 130-km long India-Bangladesh Friendship Pipeline (IBFPL) project aims to export oil products from India to Bangladesh.

Apart from this, the Prime Minister also said that the border huts between Bangladesh and India would be reopened in different parts of the border region after the closure during the Corona period.

The relationship developed due to the visit of the representatives of the neighboring Indian states of Bangladesh is beneficial for the Bangladeshi national interest. The 32 MLAs’ Dhaka visit will definitely speak in favor of Bangladesh in India.

It will benefit Bangladesh. Parliamentarians from both India and Bangladesh should also visit the neighboring states continuously. It develops various relationships, including trade, which is very positive.

Work is going on to increase the bilateral relations between Assam and Bangladesh through various means. Apart from the visit of the delegation of the Legislative Assembly to Dhaka, the north-eastern state of India is going to open new doors of relations with Assam through the Sylhet-Silchar festival. In an attempt to celebrate the age-old people-to-people connect of the region, India Foundation proposes to organise the 1st Silchar-Sylhet Festival on December 2-4, 2022 in the city of Silchar, Assam. There will be cultural & literary festivals apart from business interaction during the three days.

The aim of the festival is to revisit the common values and shared heritage of the twin cities and their people separated by international borders. The festival will also bring together eminent people from public and social life, industrialists, artists, scholars, and practitioners from both sides to discuss and deliberate on issues of mutual growth and opportunity. In addition, the Festival will also provide a platform to explore multi-disciplinary trade opportunities in sectors such as healthcare, tourism, education, and digital infrastructure. The festival will improve interpersonal relationships and explore various business opportunities, including those involving borders and rivers. All are excited about making the event a success.

This will benefit both Bangladesh and India. It will be attended by the Chief Ministers of Assam, Manipur and Meghalaya besides several ministers of Bangladesh and India. Members of Parliament and senior officials will also be present. As a result of the festival, the connectivity of Dhaka with the north-eastern region of India will increase. Speed will come in business and investment.

Prime Minister Sheikh Hasina visited New Delhi in the first week of last September and invited the Chief Ministers of the seven states of North-Eastern India to visit Dhaka. Although the chief ministers have not visited Dhaka so far, various issues of relations will be discussed through the Sylhet-Silchar festival and the Dhaka visit of 37 MLAs of the Assam Assembly.

The seven states in the northeastern region of India are Assam, Meghalaya, Manipur, Tripura, Mizoram, Nagaland and Arunachal Pradesh. Bangladesh has a large border with Assam, Meghalaya and Greater Sylhet Division. Before 1947 Assam-Sylhet were together. After partition the two cities became separated. The Hasina and Modi governments are looking to create new areas for business and investment, including increasing connectivity between the two cities.

Due to some steps taken by the present government, along with the central government of India, the North-Eastern states are quite relieved. It is being accepted by India. Assam Chief Minister Himanta Biswa Sharma praised Prime Minister Sheikh Hasina’s ‘zero tolerance policy’ against terrorism and separatism and said that Bangladesh has played an important role in countering terrorism in the region. This will usher in a new chapter in Bangladesh’s bilateral relations with Northeast India.

According to stakeholders, Bangladesh and India have a cordial, complex and extensive relationship and partnership. Assam is one of the partners in this partnership. Assam, the largest state in the northeastern region of India, shares a 263-km river and land border with Bangladesh. Trade with Bangladesh is very important for both sides considering its size, population and location. India’s foreign minister. When S Jaishankar visited Dhaka in May 2020, Sheikh Hasina offered India the use of Chittagong port. But India has not yet started using Pura Dastu.

Once it starts, the connectivity of Bangladesh and the North-Eastern region of India will be expanded. The policy makers of the two countries are of the opinion that most of the Bangladesh-India border is connected with the state of West Bengal. In terms of commercial activities, the people of Bangladesh have a special attraction with this Bengali-speaking region of India. Similarly, if bilateral relations and trade between Bangladesh and Northeast India improve, the picture of the entire region will change.

Meanwhile, in a joint venture between Numaligarh Refinery Limited and Bangladesh Petroleum Corporation, construction of a diesel pipeline from Numaligarh in Assam, Bangladesh and India to Parvatipur in Bangladesh is nearing completion. In the meantime, diesel is coming from West Bengal’s Siliguri to Parvatipur by wagon.

Overall, both countries will benefit from improved communication and trade relations between Bangladesh and Assam through diplomatic and political understanding. Besides, there is a lot of potential to increase the export of products from Sylhet, Bangladesh to Assam in Northeast India.

December 8, 2022
MULTAN: Pakistan Skipper Babar Azam has said that efforts would be made to play cricket game as per planning and conditions to win the...