Haqeeqi March: Nothing for you to fear, no punishment to come

The Long March that obliged two generals to hold a presser 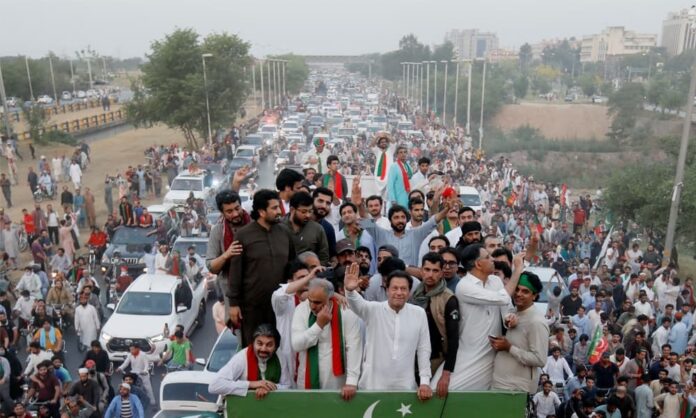 There is a saying that hybrid creatures eat their creators once they have grown teeth. Chairman Pakistan Pakistan Tehreek-e-Insaf (PTI) Imran Khan started his “Haqeeqi Azadi March” (Real Independence March) on Friday after an unprecedented press conference held by two Lieutenant Generals on Thursday who guaranteed the nation that the military is no more involved in politics and the Army as an institution had decided it would not meddle in politics. Khan’s idea of Haqeeqi Azadi is of course independence of the public and the politicians from the Army, which according to Imran Khan had been interfering in politics since the independence of Pakistan. Of course, his Haqeeqi Azadi is not from politicians in power because they, according to Khan’s narrative, are as powerless as Imran Khan claimed he had been when he was Prime Minister of Pakistan. When DG ISPR Lt Gen Babar Iftikhar was asked to comment about the alleged involvement of the Pakistan Army in the exceptional political rise of Imran Khan, he and his fellow lieutenant general avoided answering and said some other day this point could be discussed at length.

There is no need to get involved in how Imran Khan managed 175-plus National Assembly seats in 2018 though his tally was just 30-plus in 2013, which was the greatest figure the PTI ever had in the National Assembly since it was launched as a political party. Hybrid politicians and a hybrid system, like the partyless Parliament of 1985 and the formation of king’s parties had always been a part of Pakistani politics.

Now political scientists in uniforms say that they have closed down political laboratories and I think we must believe them because we do not have any other option than believing them. By trusting they have closed down the political laboratory, we can discuss what would be next. From Karachi-based ethnic party to the Taliban, the Pakistani establishment has successfully managed with Frankenstein monsters but this is the first time that a hybrid creature had compelled two prime wings of the Pakistan Army to hold a joint press conference where two three-star generals had been explaining the situation they had been facing while the alleged hybrid creature kicked off his Haqeeqi March after this unprecedented press conference.

This indicates that Imran Khan is all ready for a head-on collision with a state institution that allegedly nurtured him for years. Having a cult following with him, Khan is moving slowly but surely toward his destination. Only he knows whether it is Rawalpindi Mall Road, H-9 ground, or D Chowk Islamabad. The Supreme Court of Pakistan has already granted him permission for peaceful political activities. God knows whether his March is peaceful or not.

One must accept that Imran Khan has become the only person in Pakistan who is backed by personalities like Shirin Mazari, Shah Mahmood Qurashi, Zubaida Jalal, Omar Ayub Khan and many more who are known for their dedicated relations with the military establishment, and their presence around Imran Khan indicates “things are not as simple as they look”.

The two DGs at Thursday’s press conference also said that former Prime Minister Imran Khan had offered “life-long extension” to COAS Gen Qamar Bajwa. This reminds me of a scene from the early 1990s. I remember in March/April 1993, the then President Ghulam Ishaq Khan and the then Prime Minister Mian Nawaz Sharif were on the warpath. To ward off the threat of a dissolution under Article 58 (2-b), Nawaz Sharif offered his support to Ghuman Ishaq Khan if the latter wished to be re-elected.

Ghulam Ishaq Khan now felt compelled to dismiss the government lest he was seen to be bargaining for office. In case, Imran Khan too similarly offered General Bajwa a bait to wriggle out of the no-confidence motion, it was very likely to backfire. In fact, if another extension was tabled (as the two DGs stated in the famous presser on the 27th), it would be worse than horsetrading, of which our politicians have often been accused. I consider Imran Khan’s proposal was just a perversion of an institution and the COAS took bold steps by not only rejecting it but also deciding on his retirement after the one extension he is already completing now.

On the other hand, the delay in the announcement of the name of the new Chief of Army Staff has also supported Imran Khan because delay in such important announcements always helps to generate gossip and conspiracy theories. All this scene is taking place when anchorperson Arshad Sharif had brutally been killed in the restive land of Kenya where he was residing after leaving Pakistan.

Unfortunately, the fears expressed by former PTI federal minister Faisal Vawda in a hurriedly called press conference are not “so unfounded” that the dirty, brutal, and ruthless game has entered into a deadly phase where spreading corpses in streets is very much likely. His press conference cost him the termination of his basic membership of the PTI and the abusive allegations he is now facing from the PTI leadership. One should appreciate Faisal that he had exposed many who are allegedly planning dirty scenes to ham this country that is always going through economic disasters.

In Thursday’s press conference the DG ISPR and the DG ISI confirmed that the late Arshad Sharif had always been in their contact as he was the brother of a martyred military officer and son of a ghazi as his father was a retired officer of Pakistan Navy. Arshad Sharif who ran shows “How did US change regimes all over the world” and “Vo Koon Tha?” (who was he?) was a polite and well-educated anchorperson who had a remarkable professional rise till his unfortunate death because he had been holding shows to explain alleged corruption of all political parties except PTI. He had access to material against PML(N), PPP, JUI, and other anti-PTI parties.

He had to flee the country when the KPK government informed him that his life was threatened by the Tehrik Taliban Pakistan. Former Prime Minister Imran Khan had said several times that he advised Arshad Sharif to leave the country. Former Federal Minister Shirin Mazari claimed that head money was announced for killing Arshad Sharif and he was advised by her party to leave the country. During Thursday’s press conference, the DG ISPR said that an investigation team had been formed to probe why did Arshad go to Kenya, who advised him to go there, with whom he had been living, and who had been looking after his stay in Kenya?

He said that we all must wait for the findings of the investigations team. The DG ISPR maintained that Arshad Sharif was a very capable and hardworking journalist, adding that he had no life threats in Pakistan. General Babar Iftikhar said that as per their information, a threat alert was issued by the Khyber Pakhtunkhwa government but no details were shared as to where the provincial government received the threat. He said that the KPK government extended security to Arshad Sharif and also facilitated his exit from the country.

He said that an impartial and transparent investigation must be carried out to ascertain the facts which led to the killing of Arshad Sharif. He said that the CEO of ARY Digital Network Salman Iqbal must also be included in the investigation. As a former Crime Reporter, I believe that one should not comment on the death of Arshad Sharif because his dead body had two autopsies, one in Kenya and a second in Islamabad, and the autopsy reports would determine in what circumstance he had been shot dead. We all should wait till the investigation report is with us.  In homicide crime, the foremost point is who is the beneficiary of any killing and in this case, I believe beneficiaries are those who want to create doubts against the military establishment and the sitting government of Pakistan because the late anchorperson had been critical about the military establishment and the PML(N)-led multiparty government.

Unfortunately, the fears expressed by former PTI federal minister Faisal Vawda in a hurriedly called press conference are not “so unfounded” that the dirty, brutal, and ruthless game has entered into a deadly phase where spreading corpses in streets is very much likely. His press conference cost him the termination of his basic membership of the PTI and the abusive allegations he is now facing from the PTI leadership. One should appreciate Faisal that he had exposed many who are allegedly planning dirty scenes to ham this country that is always going through economic disasters.

Nothing for you to fear, no punishment to come. Oh I’d pay you back
if I only had the power at my command!”

No more words—he dashed toward the city, heart racing for some great exploit, rushing on
like a champion stallion drawing a chariot full tilt, sweeping across the plain in easy, tearing strides—
Homer–The Iliad