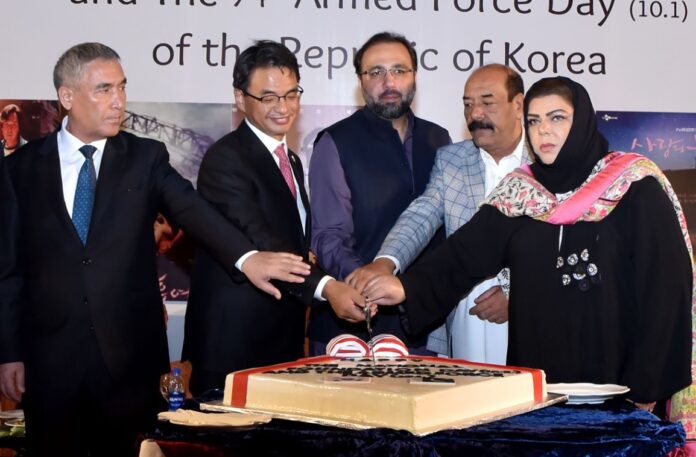 ISLAMABAD: Federal Minister for Board of Investment (BOI) Chaudhry Salik Hussain has said that there is a huge potential in furthering economic ties between Pakistan and South Korea and the agreement between Samsung and Lucky Motors for production of smart-phones in Pakistan would further strengthen the economic and trade ties between the two friendly countries.

Addressing the participants of a reception held to commemorate the National Foundation and the Armed Forces Day of Republic of Korea (RoK) here as chief guest, Salik Hussain said there is room for further expansion of economic, trade relations between Republic of Korea and Pakistan.

The Minister said the diplomatic relations between the two countries are based on bilateral diplomatic and trade ties, which have deep roots in history.

The minister said South Korea and Pakistan have a great potential of skilled labor which has played its full role for the development not only of their country but also in different regions of the world.

He recalled the history of the start of diplomatic bilateral relations and also refreshed that in the decades of the 60s and 70s, the Pakistani and Korean workforce played a key role in the construction of today’s Middle East.

“Our relations date back deep into history  in ‘Gandhara civilization”, he said. He also referred to the joint venture of the Korean South East Power Company with a local company at Gullpore generating 102 MW of electricity.

Meanwhile, on the occasion, Ambassador of the Republic of South Korea to Pakistan, Suh Sangpyo said that there is a strong economic and trade relationship between Pakistan and South Korea which has a lot of potential.

New avenues of economic and trade cooperation will be opened in the near future in both the countries, he said.

The Ambassador said, ” Relations with Pakistan are enhancing the due potential in all sectors and Korean companies are coming to Pakistan.”

He said “We have revised our travel advisory for Pakistan and soon Korea will start group tours.” Korea is standing with Pakistan in the relief and restoration of flood-affected people.

The ambassador in his address said both of the countries have strengthened their ties in different sectors including trade, investments, education, culture and sports.

“We are going to hold more cultural events in this year in collaboration with Pakistani partners.”

January 27, 2023
LAHORE: Law officers In Punjab Advocate General office are enjoying hefty salaries ranging from Rs 0.5 to 0.6 million a month, it was revealed...