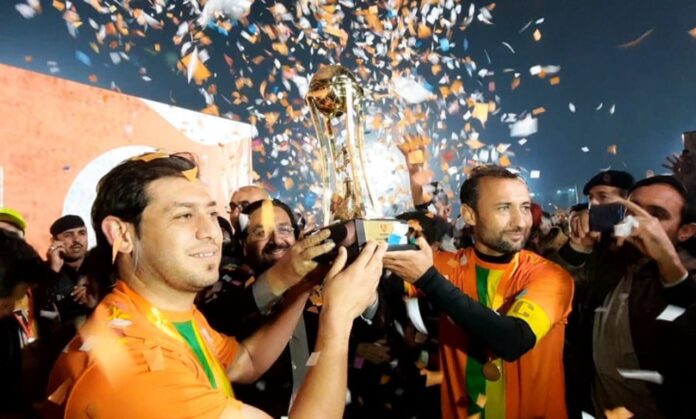 PESHAWAR: Dara Nangyali and DC Sarkar off to a flying start after recording opening day victories in the Peshawar Football League Season 5, which got underway here at the historical Tehmas Khan Football Stadium on Saturday.

DC Sarkar defeated Afghan Pakhtun in another thrilling match by 3-0. DC Sarkar, the two times winner of the Peshawar League, did not give much time to the Afghan Pakhtun team to strike back and recorded a 3-0 victory in the 16 teams League.

The first match of the league was played between Dara Ningyali and DG Sports Warriors in which Dara secured a 3-0. Usman scored in the 50th minute, Raheel in the 65th minute and Osama in the 74th minute.

The second match brought success to the team was played between DC Sarkari and Afghan Pashtun in which DC Sarkari won by 3-0. Riaz scored goals in the 31st and 64th minutes while Tariq scored in the 59th minute for DC Sarkar. DC Sarkar players played well and did not give much time to Afghan Pakhtun to strike back.

Chief Organizer of the Football League, Chairman Youth Glam Welfare Organization, Gul Haider formally inaugurated the League. Talking to the media Gul Haider said that the slogan of the League is to prevent drugs and “Say no Drug”.

He said with such an approach, through League the game of football would also be promoted. He said we are spreading the message of drug free society and for this the efforts of the Khyber Pakhtunkhwa government and especially the Peshawar Division administration and the Commissioner Peshawar continued to eliminate drugs and save the youth.

He said that this league is being telecasted live on TV for the second time in history. In the first season of Peshawar Football League, DC Sarkar’s team won, while in the second and third seasons, Shinwari Stori secured victory.

The team of Director General of Sports won the Season-4. The tournament will continue for 16 days, in which each team will play three matches, after which the quarter-finals, semi-finals and finals will be held. The Tahamas Khan Football Stadium has been beautifully decorated for the tournament and many of the league matches will also be played under floodlights.

DOHA: Declan Rice believes England should be feared by their World Cup rivals as they gear up for a last-16 showdown with Senegal on...
Read more
Sports

DOHA: Lionel Messi believes Diego Maradona would be "super happy" after he led Argentina into the World Cup last 16 on Wednesday thanks to...
Read more
- Advertisment -