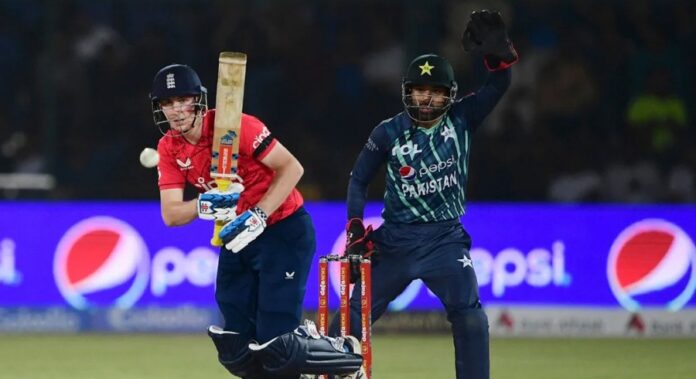 KARACHI: England on Tuesday defeated Pakistan by six wickets in the first T20I of the seven-match series here at the National Stadium in Karachi.

The Englishmen were playing their first game on the shores of Pakistan in 17 years and they showed a great performance in all the departments. They chased down an easy target in the last over after restricting Pakistan to 158/7.

Earlier, England captain Moeen Ali won the toss and opted to bowl first. No Pakistani batsman could make an impact and wickets kept tumbling one after another after a good start.

In reply, Alex Hales played a watchful knock on his return to international cricket after three and a half years. The 33-year-old scored 40-ball 53 while Harry Brook made impressive 25-ball 42*.

Usman Qadir was the pick of the bowlers for Pakistan, bagging 2-36 while Shahnawaz Dahani and Haris Rauf claimed a wicket each.

Remember, Pakistan’s players were wearing a special kit in today’s game, which shows their names and numbers submerged in water, to show solidarity with victims of the recent devastating floods.