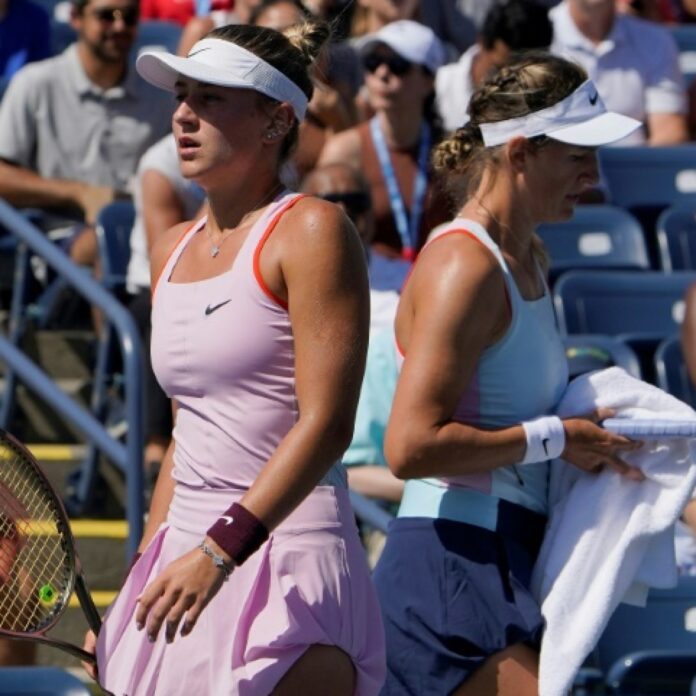 NEW YORK: Serena Williams closed one chapter on her epic Grand Slam story at the US Open on Thursday while Victoria Azarenka triumphed in a politically-charged grudge match.

For the first time since 2018, Serena and sister Venus revived the partnership which has brought them 14 doubles titles at the majors.

However, their hopes of collecting a third crown in New York were dashed in a 7-6 (7/5), 6-4 defeat to Czech pairing Linda Noskova and Lucie Hradecka.

The loss leaves 40-year-old Serena free to focus on what is widely expected to be the final singles campaign of her landmark 27-year career before retirement.

On Friday, the 23-time Slam singles winner will face Australia’s Ajla Tomljanovic for a place in the fourth round.

Serena and her 42-year-old sister went down fighting, clawing back from 1-4 down in the second set before the Czech pair steadied the ship.

“Im still in shock that we won because this is the first time we played together,” said Hradecka.

“I’m so sorry for you that we beat them but we are so happy that we did it.”

Meanwhile, Azarenka triumphed against Marta Kostyuk 6-2, 6-3 in a match dominated by bitter exchanges over the conflict in Ukraine.

Last week, Belarusian star Azarenka was axed from an exhibition event aimed at raising money for the war-ravaged country.

Ukraine’s Kostyuk had refused to take part in protest at the presence of Azarenka who she has criticised for a perceived failure to condemn the invasion of her home country.

Belarus is a close ally of Russia and has allowed Moscow to use its territory to launch attacks into Ukraine.

The tension between the two was evident at the end of their tie on Court 17 with Kostyuk offering just a touch of racquets instead of the customary post-match handshake.

“How did it make me feel? It’s not the most important thing in the world right now,” said Azarenka.

Kostyuk, the 20-year-old world number 65, said a handshake would not have been appropriate.

“I genuinely wanted to warn her that I’m not going to shake her hand,” she said.

“She never came up to me personally to tell me her opinion, what she thinks (about the war).”

Away from the controversy, world number one and French Open champion Iga Swiatek cruised into the third round with a 6-3, 6-2 win over 2017 champion Sloane Stephens.

Paula Badosa, the fourth seed and potential semi-final opponent of Swiatek, suffered another miserable return to the city of her birth.

The Spaniard’s failure to get beyond the second round will stretch for another year after losing 6-7 (5/7), 6-1, 6-2 to Petra Martic of Croatia.

China will have four women in the last 32 for the first time at a Slam after Zheng Qinwen defeated Anastasia Potapova and Yuan Yue got the better of Irina-Camelia Begu.

Zhang Shuai and Wang Xiyu had already booked their spots in the next stage.

Nadal, the holder of a record 22 men’s Slam titles and a four-time champion in New York, enjoys a 13-4 career lead over Fognini.

However, the Italian famously defeated the Spanish star from two sets down in the third round of the US Open in 2015.

A win on Thursday will allow Australian and French Open champion Nadal to become the first player to secure a spot at this year’s ATP Finals.

World number four Alcaraz, a quarter-finalist in 2021, went through 6-2, 6-1, 7-5 on the back of 46 winners and will next face Jenson Brooksby of the United States.

It was the 46th victory of the year for the 19-year-old, tying him with Stefanos Tsitsipas for the best stretch.

Cameron Norrie and Dan Evans reached the third round giving Britain four men in the last 32 in New York for the first time since 1933.

Andy Murray and Jack Draper booked their places in the third round on Wednesday.