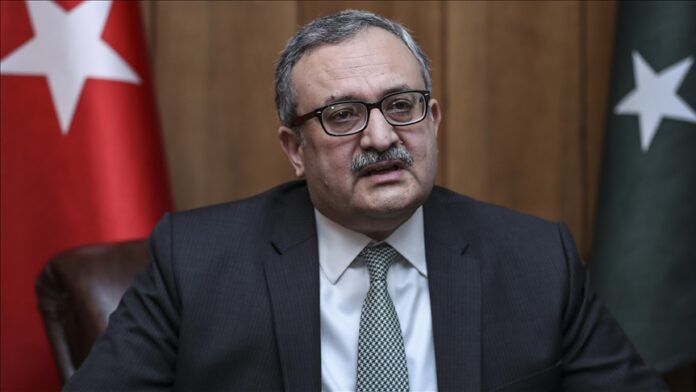 Ambassador Muhammad Syrus Sajjad Qazi hoisted the national flag to the tune of the national anthem in the presence of the Turkish dignitaries, Pakistani community and media.

Messages of the president and prime minister of Pakistan were read out on the occasion.

In their messages, the country’s leadership paid tribute to the sacrifices of ancestors and vowed to transform Pakistan in accordance with the vision of the nation’s founder Quaid-i-Azam Muhammad Ali Jinnah and national poet Allama Muhammad Iqbal.

The leadership also expressed solidarity with the people of Indian-occupied Jammu and Kashmir who are facing military siege for the past three years and reassured Pakistan’s political, moral and diplomatic support for their legitimate right to self-determination.

Speaking on the event, Qazi felicitated the nation, particularly the Pakistani community in Türkiye, on the 75th anniversary of the independence.

Qazi stated: “August 14 reminds us of the epic democratic struggle of our ancestors to secure a separate homeland for the Muslims of the subcontinent where they could live according to their own will.

“It is a day to reiterate the firm resolve to uphold our national values of unity, faith and discipline as envisioned by our Quaid and renew our commitment to the objectives of the creation of Pakistan.”

The ambassador also thanked the Turkish leadership and people for congratulatory messages and for participating in the Pakistan Independence Day celebrations.

Ankara’s landmark, ‘Atakule’, the tallest tower and best-lit building, will be showcasing messages of Pakistan-Türkiye brotherhood and solidarity.

Moreover, bridges in Istanbul on the Bosporus linking Asia with Europe will be illuminated in Pakistan’s flag colours this evening.

On August 14, 1947, the independent state of Pakistan appeared on the world stage for the first time when the Indian subcontinent was formally divided into two new dominions of India and Pakistan under the terms of the Indian Independence Act, adopted by the British Parliament.

The Muslims’ proposal to establish a separate state was accepted on March 23, 1940.

ISLAMABAD: Ahmad Safeer of Pakistan has broken the Guinness World Record of India's Narayanan N of the most full extension punches in one minute. Ahmed,...
Read more
NATIONAL