The price of the KPK PTI 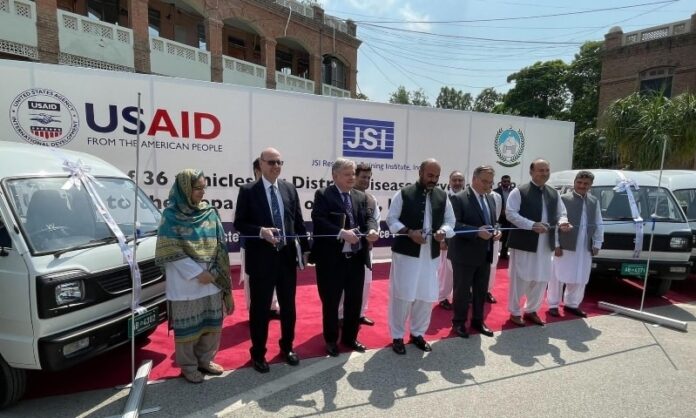 On August 4, at the Governor House in Peshawar, a ceremony was held to display the handing over of keys of 36 vehicles. The donor was the USA and the recipient was the provincial government of Khyber Pakhtunkhwa. US Ambassador to Pakistan Donald Blome graced the occasion and handed over the keys to Provincial Minister for Health and Finance Tiamur Saleem Khan.

The KPK government is run by the Pakistan Tehreke Insaf (PTI). This is the same party the chairman of which raised an anti-US slogan to stir the masses to win votes in the recently held bye-elections. The chairman, Imran Khan, laid the blame for the fall of the PTI’s government in the Centre on a conspiracy hatched by the USA, which got local collaborators including the Pakistan Democratic Movement (PDM). The anti-US slogan moved the voters emotionally.

Even on July 16, President Arif Alvi, who was otherwise a devoted member of the PTI, insinuated the US’s role in toppling the PTI’s government in Pakistan. He said so while addressing a group of Pakistani doctors working in the USA, without realizing that his sham stance could stir anti-US sentiment in expatriate Pakistanis settled in the USA and that his pretense could jeopardize the interests of Pakistanis in the USA.

The major slogan functional in the bye-elections held on July 17 was that the voters had to cherry-pick between Azadi ya Ghulami (freedom or servitude) of the USA. That is, if the voters wanted freedom, they should vote for the PTI’s candidate. Hence, the relevance of losing and winning the bye-elections was the perception that the USA had occupied Pakistan and the PTI was the only saviour. Consequently, the PTI performed better than any bye-elections it took part in before. The credit was owed not to the PTI’s projects on the ground but to the anti-US narrative heating up the streets

After losing the democratic battle on April 10 to a no-confidence motion in the National Assembly, the anti-US populism has been the mainstay of the PTI’s politics. Nevertheless, only 36 vehicles are enough to dissipate the anti-US stance of the PTI, at least in KPK. It is yet to be seen what new narrative the PTI comes up with to rouse the voters again sentimentally.

By that time, US Ambassador Blome had arrived in Pakistan. The situation must have caught his attention to deal with it aptly. In principle, the ceremony in Peshawar was not so auspicious as to require a person of the ambassador’s stature. Moreover, the ambassador was not required to be there, because the Mission Director of the donor agency, USAID, Reed Ashelman, was in attendance. In fact, this could be the job of Ashelman to perform.

On the one hand, the KPK government was keen to wash the stain of being anti-US, whereas on the other hand, the US representatives in Pakistan were enthused to brush up the image of their country. Initiatives coincided and conciliated. The ceremony took place to dispel all doubts of estrangement and hostility. The ceremony was a win-win situation for both parties.

On the occasion, US Ambassador Blome stated that the generosity expressed was to mark the 75th anniversary of the US-Pak partnership. The ambassador knew that these words should have been spoken in Islamabad and not in any provincial capital. His words were a lame justification couched in diplomacy.

As per the ambassador’s words, US-Pak relations dipped so low as to be confined to the health sector only. In the past, bilateral relations saw Pakistan’s defence, economic and social sectors get benefits. The last memorable interaction was the Kerry-Lugar-Berman Act of 2010 that earmarked for Pakistan $1.5 billion per year for five years. The later years saw deterioration in bilateral relations, boiling down now to the donation of 36 vehicles for health surveillance purposes.

Through the ceremony, US Ambassador made his first public appearance. Former federal minister Shireen Mazari got surprised and remained unsuccessful in holding her breath on the aerial visit of the US delegation to the Pak-Afghan Torkham border.

The ceremony was notable for two reasons. First, the ceremony shattered the political narrative of the PTI that it lost power to the US-sponsored conspiracy. Second, the ceremony helped the US representatives show the Pakistanis that they were not antagonistic to them.

Showcasing the amicable interaction was vital for both the parties to tell the Pakistanis that the anti-US narrative nurtured by the PTI chairman was a farce, though the narrative had served its purpose. Nevertheless, the rise in the PTI’s popularity to cash in on the opportunity of bye-elections indicated that the ground for anti-US sentiment was still fertile. The fecundity must be a point of disquiet for the US delegation.

By donating 36 vehicles to the provincial health sector, the US officials must have got a respite from the accusation that the USA had any role to play in toppling the PTI’s regime in the Centre. Apparently, the ceremony showed that 36 vehicles were potent enough to smack the anti-US narrative and lay bare the reality. Now, it is expected that the USA is no longer seen as a conspirator and that the PTI has no grievance against the USA.

The delegation also met KPK’s Chief Minister  Mehmood Khan in the CM House and discussed issues of mutual interest. The CM preferred neither to agitate nor to issue any caveat to the guests on the supposed interference of the USA in Pakistan’s internal affairs. The CM’s complacency meant that there was none. If someone could convey this point to Murad Saeed and Faisal Javed of the PTI, that realism in politics is far different from the rhetoric of the podium.  The KPK’s CM remained grateful to the USA for its support on various health projects going on in the province. The same also means that more such projects are expected and more gifts are on the way.

After losing the democratic battle on April 10 to a no-confidence motion in the National Assembly, the anti-US populism has been the mainstay of the PTI’s politics. Nevertheless, only 36 vehicles are enough to dissipate the anti-US stance of the PTI, at least in KPK. It is yet to be seen what new narrative the PTI comes up with to rouse the voters again sentimentally.

December 2, 2022
ISLAMABAD: The Lahore High Court (LHC) has hinted at closure of educational institutions as smog continues to intensify in Lahore. A bench headed by Justice...