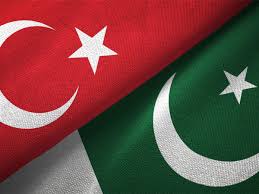 Pakistan and Turkiye on Friday inked the Preferential Trade Agreement aimed at boosting trade in goods between the two countries.

Prime Minister Shehbaz Sharif said the “landmark trade in goods agreement” between Pakistan and Turkiye would reflect the strength of bilateral fraternal relations, and take trade and investment ties to further heights.

The prime minister, addressing a luncheon reception he hosted for the visiting Turkish Trade Minister Dr Mehmet Mus and his delegation, urged the business communities from both the countries to explore the opportunities in varying sectors, particularly the renewable energy.

Calling it the “most important achievement” of the commerce ministers of Pakistan and Turkiye and their respective teams, the prime minister said the said agreement was a manifestation of the bilateral brotherhood and relations anchored in mutual trust and respect.

However, he said the volume of bilateral trade and investment did not reflect the existing unique relationship.

He said both the countries had already resolved to take the bilateral trade to $5 billion in next three years.

The prime minister said he had “fruitful and productive” discussion with Turkish business community during his visit to Turkiye in May last. The ongoing visit of the Turkish delegation and signing of the PTA was in pursuance of the very understanding to further the discussion, he added.

He said he would welcome Turkish firms to invest in Pakistan in hydel sector, as the country was bestowed with immense potential with hydel resources which remained unexplored.

He said the national economy could be strengthened and the increasing import bill could be curtailed by exploring renewable, solar and wind energy.

“Solar energy is the order of the day,” the prime minister remarked and mentioned the government’s decision to introduce solar tube wells, establishment of solar parks of 5000-6000 MW capacity, installation of solar panels on households and solarization of government offices.

Shehbaz Sharif assured that he would personally engage with the ministers and officers concerned to find out from where to start implementing the energy projects.

He also guaranteed the swift payments of profits and other funds to potential investors without any impediments of red tapism and nepotism.

Trade Minister Dr Mehmet Mus said the occasion marked a significant milestone which would contribute in a long way to further strengthening and expansion of trade ties.

He said meeting expectations of all stakeholders was not easy, however added
that dedication and step-by-step measures led to conclusion of the accord.

He thanked PM Shehbaz Sharif for his leadership to seal the agreement for
the betterment of the two countries and enhancing linkages between their business communities.

Syed Naveed Qamar hoped the PTA between Pakistan and Turkey would open up new opportunities to boost bilateral trade across various sectors.

He stressed the need to increase business-to-business interaction for strengthening trade and investment relations between the brotherly countries.

The key highlights of the trade concessions offered by both sides under the Agreement are as follows: (i) Turkiye had offered concessions to Pakistan on 261 Tariff Lines, which include key items of Pakistan’s export interest to Turkiye from both agriculture and the industrial sectors.