A National Consultation on the Economy

The backdrop was the FSC verdict on riba 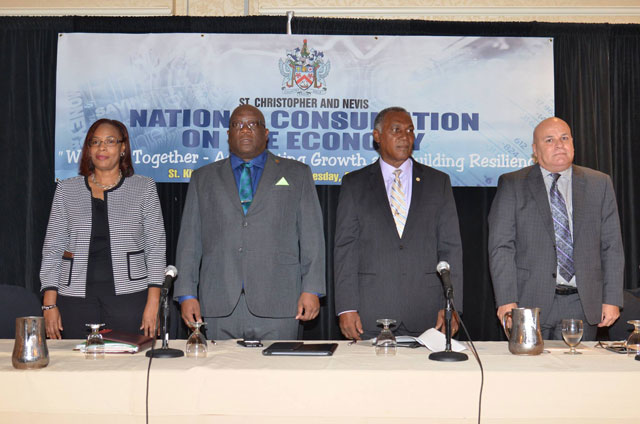 I was really excited when I received an invitation to join a ‘National Consultation on the Economy of Pakistan’ on July 19 in one of the leading hotels of Lahore. Most of the participants arrived on time which suggested everyone’s eagerness in the discussion. Some leading journalists, academicians, authors, serving and retired government officials and judges, religious scholars, development sector representatives, lawyers, engineers, economists and businessmen participated in the consultation.

There was significant diversity in thoughts and ideas of participants. Generally religious scholars were of the view to link economic policies with rudimentary practices of early Islamic society with the belief that it is the responsibility of the Creator to feed every living organism on this planet, including human beings. Which is undoubtedly true but why do we forget that “man shall have nothing but he strives for”?. Why are we taught to earnestly pray for “which is good in the world”? Why are we told to “disperse in the land to seek His Bounty”?

Everyone stressed the need for political stability in the Country. A representative of The Financial Markets Association of Pakistan (FMAP) gave some interesting suggestions, such as tagging imports with exports, balancing expenditures and income, per USD rebate for overseas Pakistanis on their remittances which can increase remittances threefold, significant devaluation of rupee in coming months beyond Rs 250 per dollar was also predicted

We need to develop a balanced view of life. It is undeniable that majority of Muslim population at the moment is suffering due to the weak economic conditions of Muslim societies. Muslim populations are fundamentally dependent on non-Muslim societies for reasonably comfortable life in modern times from transportation to cellular communications, from medicines to food commodities and from furniture to fixtures and fittings. You name anything for comfort, efficiency and productivity it will have origin in a society other than Muslims. Which I think is unbecoming of followers of a religion which was based on Iqra– reading, understanding, analysis and evaluation.

Attractive part of the session was the participation from different walks of life and from different parts of the globe. The meeting was held in the backdrop of the recent verdict of the Federal Shariat Court to ban interest (riba) from all financial institutions of Pakistan. Therefore the initial focus of the discussion was on miseries and exploitation of riba which usually culminates its cycle with economic depressions in different societies but in recent times we witnessed the global impact of such economic turmoil.

The Banking system, tax regimens, trade embargoes, global financial treaties, monopolies, all are blamed for the sufferings of masses in modern capitalistic economies. All claims of a trickledown effect are usually challenged by relevant experts calling for overall transformation of the financial and economic system to bring prosperity for the less advantaged. It has become a real task for economic and financial experts to enact a system ensuring equitable distribution of wealth which human society witnessed for hundreds of years in the Islamic super-continental state.

Contemporary financial and economic experts in the session were emphasising the need of expanding the tax net to overcome current difficulties of the country besides other initiatives to expand and strengthen the overall economic conditions of Pakistan. Most of the participants were surprised when a presenter from the UK on a visit to Pakistan told the audience that they pay 20% VAT (value added tax) and then almost 20% on savings to fulfil their national responsibilities. It convinced all participants to inculcate the culture of paying tax but almost everyone was not convinced with current practices of FBR and emphasized the need of tax reforms for the convenience of traders and business organizations.

After the speeches of religious scholars a trade representative raised his concern that if interest is considered as a war against the Creator then why there is such a significant prosperity in western countries where interest is not prohibited. There are several justifications to this observation from the religious community such as they will get their share of happiness in this life but will not get anything in the Hereafter. However, we should remain cautious about such claims because who knows what happens in the life after death.

The kind of observation from the trade representative is based on apparent facts but lacks deep understanding of business dynamics of Western communities. There is a huge segment of leading global business organizations around the world which operates on zero leverage which means without interest-based financing for their operations. Second, venture capital to nurture new entrepreneurs and businesses contributes exceptionally in the contemporary business landscape which is identical to Islamic shariah compliant mudarabah financing, in some cases angel investors opt for the agreement which is same as the musharakah.

Many participants advocated adopting fundamental practices of Islam for economics referring to it as the economics of Madina, at the same time several argued to strengthen modern economic indicators for the sustainability of the country. land reforms, tax reforms, electoral reforms, reforms in import and export policies, targeted subsidies, human resource development, attracting overseas Pakistanis with special policies and incentives; almost every aspect came under discussion with 26 contributors to the dialogue.

It is important to note that everyone in the hall stressed the need for political stability in the Country.  A representative of The Financial Markets Association of Pakistan (FMAP) gave some interesting suggestions, such as tagging imports with exports, balancing expenditures and income, per USD rebate for overseas Pakistanis on their remittances which can increase remittances threefold, significant devaluation of rupee in coming months beyond Rs 250 per dollar was also predicted.

Finally the host and the president of Jamat-e-Islami ex-senator and ex-minister of finance KPK Siraj-ul-Haq gave his concluding remarks. He referred to ex-chairman FBR who said that the economy of Pakistan had already defaulted. He stated that in Islam both the market and the mosque are declared as sacred and any fraud and misappropriation is prohibited in these two places.

He said that despite our extensive capability to produce agricultural goods we are subject to shortages. He shared his personal experience as KPK finance minister, giving budgets without deficit if there is authentic control on government expenditures. He invited people from all walks of life to join the mission to ensure economic prosperity of Pakistan without necessarily joining his party.