Efforts being made to raise awareness on sexual, gender-based violence in Sindh 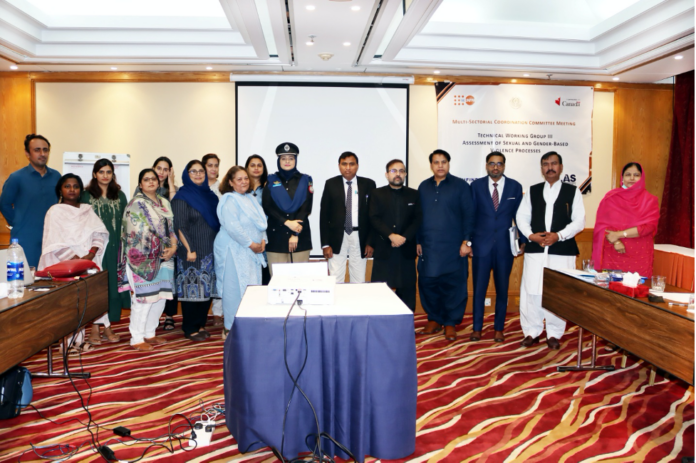 The TWG has been notified as per the recommendations of the Multi Sectoral-Coordination Committee (MSCC) under the chairmanship of the Chief Secretary, Sindh and is working to strengthen the state’s response to sexual violence in the province.

Sexual violence and rape constitute the most serious forms of violence against women and girls. These issues are complex and necessitate a well-conceived, multi-layered and multi-departmental approach for the prevention of sexual violence crimes and improved and effective response by the state followed by rehabilitation measures for victims and survivors.

The MSCC has been formed to implement the roadmap proposed in Sexual Violence Response Framework (SVRF) 2020-2024 to eradicate sexual violence in Sindh. The SVRF was developed by Women Development Department and adapted by the Law Department, Government of Sindh with the technical support of Legal Aid Society. Through SVRF, LAS commits to play an effective role in assisting the state to ensure an improved response to the cases of sexual violence so that justice to the survivors, victims and their families could be provided in a speedy, effective and appropriate manner.

The SVRF establishes roles and responsibilities, in the area of sexual violence, for various government stakeholders, including the Law Department and its affiliated offices and departments such as Office of the Advocate General, Office of the Prosecutor General, and the Human Rights Department.

Ms. Shahla Qureshi, the Chair, commenced the meeting by welcoming members of the Technical Working Group and briefly introduced the police’s mandate on improving response to sexual violence. She shared that before 2020, there was no concept of protection of human rights in Sindh and no framework had been prepared to inform practices catering to pertinent human rights issues. “Since 2020, many efforts have been dedicated towards making the police department’s approach victim-centric. One of these efforts was rebranding of SP Inquiry Cell to Gender Protection Cell, first ever special unit that handles sexual and gender-based violence (SGBV) which is also mandated to deal with malpractices of police,” she elaborated.

“There is currently a 10% quota of women in Sindh police, but it is difficult to achieve the quota due to disparaging conditions for women in the police force. Therefore, we need to make a favorable environment and a system for female police officers” she opined.

The Chair also highlighted the importance of One-Stop Protection Center, equipped with police, prosecution, and medicolegal officers, that needs to be established across Sindh. Additionally, the Chair recognized a lack of gender sensitivity especially in dealing with the cases of SGBV as a serious issue in the police. As a mitigation strategy, gender-sensitization trainings have been introduced where at least 01 investigating officer (IO) needs to be trained in SGBV case management from each district. These specialized IOs were then nominated to deal with SGBV cases. Moreover, the Chair emphasized the need to establish designated committees for sexual offences that must include at least 01 female SSP or DSP to supervise and lead. Ms. Shahla Qureshi made the following recommendations:

Ms. Qureshi also updated the TWG on the present status of the Special Sexual Offences Investigations Units (SSOIUs). Currently, the stipulated time frame for IOs is 2 years at their designated positions after training and induction. They cannot move out or relocate themselves as this hampers investigation and contributes to delay in the case.

During the meeting, Mr. Anwar Mahar highlighted a gap between prosecution and the police and said “significant emphasis must be placed on chain of custody and possible in-camera or audio recording of 164 statement of the victim to avoid withdrawal resulting from witness or complainant becoming hostile in future.”

Maliha Zia from LAS strongly recommended members of the TWG to produce a combined checklist for the police and prosecution outlining actions and processes from the inception of investigation.