A sociological perspective and solutions 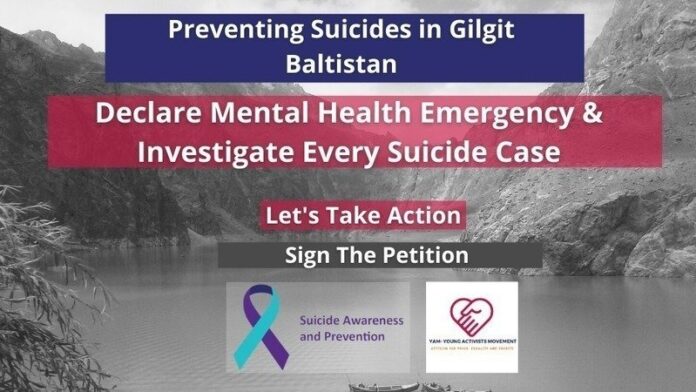 Suicide is a social construct that is caused due to deviation from norms that are in a disapproved direction and exceed the tolerance limits for an individual. Suicide is widely widespread not only in Ghizer but in all the parts of Gilgit Baltistan. The conformity to society for an individual is based on potential gains and losses. We constantly feel dissatisfied which is not due to biological longings but the social norms regulate us to what extent we are entitled. Therefore this article will focus on the causes of suicide in any society with solutions.

Suicide has no geographical division. It is the socially manifested phenomenon that is executed in the form of unsettled expectations in any social milieu. When a person finds no institutional means to fulfill the desired expectations of the society, he or she normally deviates from the socially approved norms. The rising notions of success and attribution to wealth for prosperity unsettled the expectations of those who couldn’t cope with this definition of success in life. Society provides the expectations and goals which are culturally defined.

Robert Merton in his typology of deviance asserted that if there is a gap between the reward and effort individuals tend to have suicidal ideation. In the wider society of Gilgit Baltistan, due to the acculturation of the dominated culture from the tourists and tourism, the expectations of the people psychologically subscribed to high goals but the gap between the goals and institutional means provided to the youngsters are at odds with the relations which led them to deviation and suicide.

Moving forward, the average person is anchored in an extensive network of close attachments in society. If this social integration erodes the individual commitment to the societal norms becomes less extensive. According to the Social Control Theory, the commitment and involvement of any person in society is the shield that protects them from any kind of deviance. Suicide is a deviant form of emotional deflection. As the people have fewer stakes in the society they are less attached and subscribed to societal order. The involvement can be understood through the utility of the individual in the energy and time. The people have fewer activities in their lives involving thwm in society, which further deteriorate their social control.

In Pakistan, the popular culture of the social network spaces and warfare of likes and comments on social media have faded the concept of creative involvement in games, art, and literature which causes the tendencies of individuals to make social comparison and thus they become misfits in the dominant culture. This psychological failure to cope with self-perception causes people to have suicidal ideation.

Mental health is real and suicide is a socially constructed issue due to the aforementioned reasons in which resource availability, social Comparison, and availability of means to fulfill the societal expectations play a decisive role. All these reasons are applied on the rising suicide rates in Gilgit Baltistan as well as entire population of Pakistan. We need to provide individuals with a more inclusive concept of society in which Freedom is not attached to the availability of wealth and money but with peace of mind.

The strict stratification in society based on resources is another reason for the rising suicide. The structural strain, according to Edwin Sutherland, forced that strain on the resources causing the different interpretations of life for different people. This vast heterogeneity in the expectations from the society led them to deviance which further paves way for suicide. Torn between guilt and desire, it ultimately leads to escape from the unfulfilled expectations.

Suicide is result of the systematic process in which we make an individual suicidal. The institutionalization of the taboos and shame culture with the mental health issues is the core reason why the person ailing from a mental disorder does not subscribe to a professional aid to cope with the psychological disorders.

We have developed a culture where we used to attribute mental issues to demons, spirits, supernatural, or paranormal activities. In this process, individuals tend to go to shams which provide the medical religious treatment. During this process, the chronicity is exacerbated and people incline towards suicide more than before. The mental health issues are like normal diseases of flu, cough, fever, and diabetes but society has attached the stigma to mental health issues which cause patients not to go to any professional for treatment.

According to he World Health Organization, every 40 seconds, one person commits suicide while in Pakistan 15 to 34 people commit suicide daily in the age distribution bracket of 15 to 29 years. In Pakistan and other Third world countries, there are only two practitioners for every 100,000 mental health patients. In comparison with Third World countries, the number of professionals is 75 for 100,000 patients in the developed countries. As the number of professionals is limited due to many reasons in Pakistan, to study psychology has its own stigma, as it is attributed that those who study psychology are those who become mentally challenged in their future life. People are less involved in the profession. Due to the limited number of professionals and limited access to psychologists, the problem further extends.

Coming toward the solutions to coping with  the suicides in GB and other parts of the country, it is high time to get rid of the culturally institutionalized taboos about mental disorders. The withdrawn behaviour patterns, impulsive disorder, agility, and depressive disorders must not be attributed to emotional volatility or emotional problems but they must be recognized at the very initial stage as the causal factors of mental health problems.

If someone perceives such problems, they must subscribe themselves to professional aid. Towards the sociological solutions to the problem, we can decrease the social control because in the perception of Emile Durkheim the excessive social control in the society causes an individual to be alienated from the popular culture and to glorify the disappearance of life as a solution.The excessive social control through the societal sanctions must be released and the homogeneous culture introduced of the development and acceptance of modernity.

The labels attached to the mental disorders must be unattached and popular acceptance of mental health issues as normal diseases should be made to prevail. The life adjustment should be increased through the life coping mechanisms. In the arena of psychodynamic therapies for depression and suicidal thoughts, it is necessary to introduce the mechanisms of displacement and sublimation to sublimate one issue into something other that challenges the mind of a person to map out the depression.

Mental health is real and suicide is a socially constructed issue due to the aforementioned reasons in which resource availability, social Comparison, and availability of means to fulfill the societal expectations play a decisive role. All these reasons are applied on the rising suicide rates in Gilgit Baltistan as well as entire population of Pakistan. We need to provide individuals with a more inclusive concept of society in which Freedom is not attached to the availability of wealth and money but with peace of mind.